"We know the beauty of Albuquerque is part of what makes this community such a special place to live," he said. "I was lucky to be born and raised here, and grow up with sunsets on the Sandias, and play in our local parks and foothills."

"We’re transitioning our fleet to electric vehicles as they’re phased out," he said. "Our first electric bus is in testing now."

During his time in office, Keller said the city has installed solar projects on city building, created a division for energy and sustainable management and upgraded energy build codes. Keller added that the city is partnering with PNM on a solar direct project. 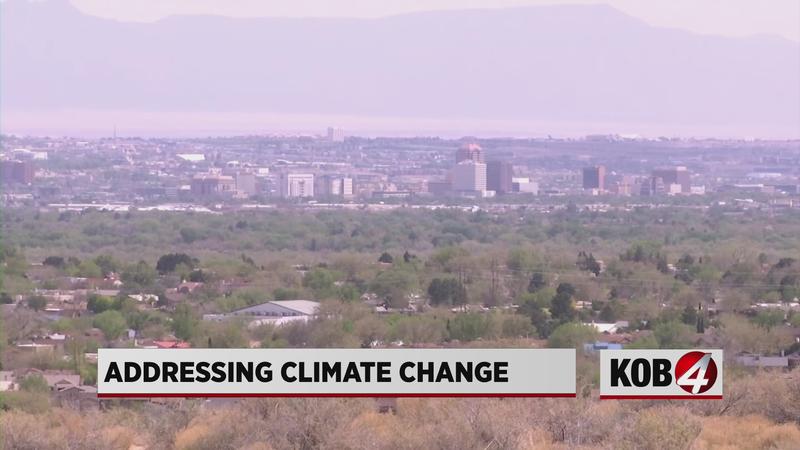 He says they’re on track to be 100% renewable energy for city government by 2025.

However, he said there’s still work to do.

"There are also areas we’ve now well documented. For example, the heat island issues that are occurring, again, some of our lower income, older neighborhoods communities of colors where the temperature is actually two to four degrees higher than it was ten years ago because the loss of the tree canopies," Keller stated.

Keller’s 2021 Climate Change Action Plan provides what he describes as a path forward.

"This plan that we are formally launching today builds upon the success the city has already had thus far and lays out a roadmap for a healthier future," Keller claimed.

Meanwhile, Governor Michelle Lujan Grisham took part in President Biden’s summit on climate. She spoke about how the federal government can learn from state’s when it comes to greenhouse gases.

"We want to establish, in our own state, given that we’re a leading oil and gas producer in this country, is that we can show innovation," Lujan Grisham said. "We can set incredibly ambitious standards, we can require accountability and leadership in making sure that we are addressing climate change in a comprehensive fashion by making sure its not just government versus the industry."