Democratic Rep. Daymon Ely is asking State Auditor Brian Colon, who is a friend of Balderas, to investigate why the attorney general agreed to seal all documents in the case against Vivint Solar Inc.

After Ely voiced concerns to the state auditor, Balderas took it up with the state Ethics Commission.

"I’m concerned that his conduct is inappropriate and that he is interfering without ability to investigate and protect the citizens of New Mexico. Also, I’m concerned he has conflicts of interests, and he thinks he is above the law," said Balderas. "I think the legislative intent was to have lawmakers not pursue conflicts of interests and definitely not interfere with investigations" 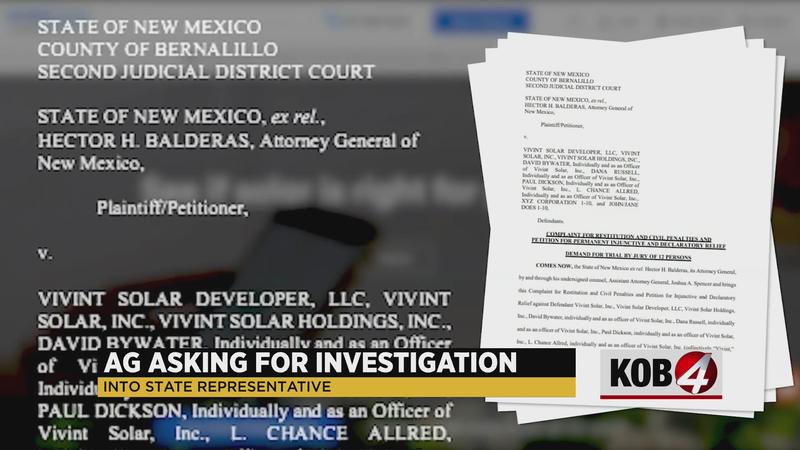 But Ely said he raised his concerns only after the legal case was out of the courts and that he has no personal gain in this matter.

"I have no financial gain, not now, not in the future. I sue lawyers for a living, I’m not involved in consumer litigation," said Ely.

He said that he feels its his duty as legislator to check and balance elected officials in the executive branch.

"Well, who is going to question him then? Who is going to oversee the Attorney General? He’s basically said nobody can do it and that is just nonsense. Of course, I have an oversight role as an individual legislator," said Ely.

The lawmaker also wants to know why Balderas didn’t pursue any specific restitution for thousands of customers as part of the settlement reached last fall.

Balderas also is facing a separate ethics complaint in a multi-billion dollar utility merger case that will affect half a million customers in New Mexico.