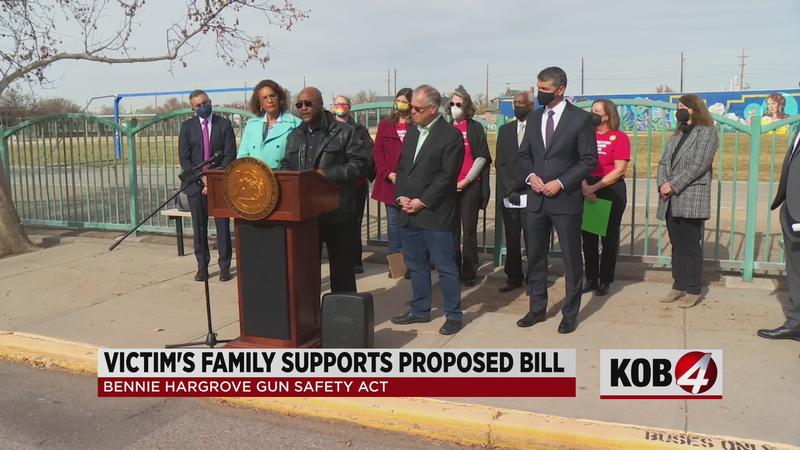 ALBUQUERQUE, N.M. — James Applewhite knew Bennie Hargrove since he was a baby. He spoke on behalf of Bennie’s family during a news conference at Washington Middle School Monday afternoon – where Bennie was reportedly shot and killed by a classmate.

"Kids getting access to guns and then going around, using them to murder people – that’s not the way the world should be," Applewhite said.

Applewhite is supporting a proposed gun safety bill, the Bennie Hargrove Gun Safety Act. Under the proposed legislation, parents who don’t secure a gun could be criminally charged if their child uses that gun to commit a crime.

Bennie was just 13 years old when he was shot and killed at the middle school. Investigators said he was killed by a classmate who took his dad’s gun to school.

"I looked at this 13-year-old boy, I have a son, and if that had happened to my son, I would have been totally devastated," said state Rep. Pamelya Herndon. "So I don’t want another parent to have to face the matter where a gun could have been stored safely and could have prevented the death of a child."

Herndon is co-sponsoring the bill alongside Sen. Daniel Ivey-Soto. In order for it to be considered during the short 30-day session, Gov. Michelle Lujan Grisham will have to add it to the agenda.

Herndon thinks it should be included in the governor’s public safety package.

"I have been in touch with the governor and the governor’s office. I’m expected on Tuesday to hear a final determination on whether or not we will have a message from the governor and to talk about how this bill actually accentuates and makes stronger the package that she’s already put forth, because it addresses the children of our state," Herndon said.

KOB 4 reached out to the governor’s office to find out if she will support the bill. A spokesperson shared the following statement:

"As you know, the governor has prioritized gun violence prevention during her time as governor, successfully enacting multiple initiatives to mitigate gun crime and prevent weapons from being used to cause harm. Lowering violent crime and ensuring New Mexicans are able to live in safe communities is paramount. While the governor’s office hasn’t seen drafted legislation for this proposal, we will, as always, thoroughly review and evaluate potential initiatives, some being more suited for the longer 60-day session which allows more time for proposals to be comprehensively addressed."