LFC: Rebuttable presumptions ‘not an evidence-based’ approach to crime

ALBUQUERQUE, N.M. — As crime takes center stage during the 2022 regular session, a memo sent to two lawmakers by analysts at the Legislative Finance Committee is asking questions about one of Gov. Michelle Lujan Grisham’s signature anti-crime plans.

The memo calls into question the effectiveness of a proposal by the governor, 2nd Judicial District Attorney Raúl Torrez and others to create a system of pretrial detention rules based on rebuttable presumptions; essentially, a list of crimes considered serious enough that just being accused of them is reason enough for the state to presume they should be kept in jail before their case is decided.

The LFC, a nonpartisan budget agency with a record of down-the-middle analysis that is heavily relied upon by lawmakers, said in the 14-page memo that using a criminal charge to determine whether to keep someone accused of a crime is “a values-based approach, not an evidence-based one.” 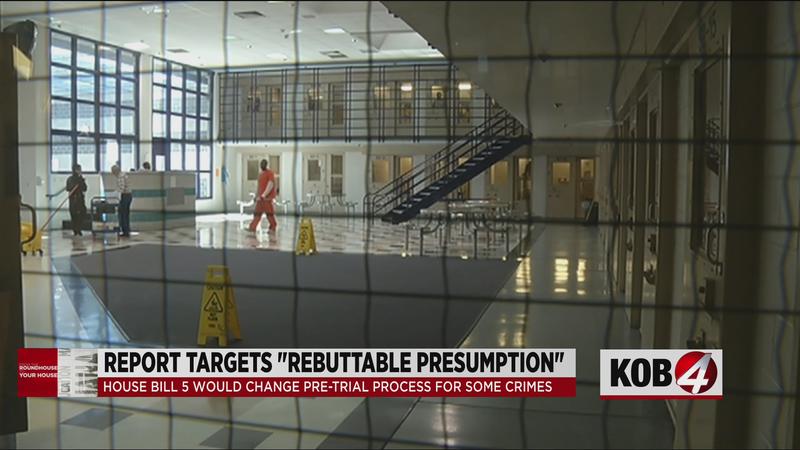 The memo says that while crime rates have increased, arrests and convictions have not. It says the promise of “swift and certain” justice has the kind of significant impact on crime rates that rebuttable presumption does not.

Public defenders told KOB 4 in the days before the legislative session began that they worried creating a system of rebuttable presumptions would amount to a feel-good measure that would rob people of their freedom while subjecting them to a system that often spits them back out when a case is dismissed by the court or, more frequently, when it is dropped by prosecutors for lack of witnesses or evidence.

"People get maybe a sense of feeling safer in the short term by passing a bill that sounds like it will make them safer,” said defender Kim Chavez Cook, an attorney who handles appeals for the Law Office of the Public Defender.

The LOPD tracks requests for pretrial detention from Torrez’s office in Bernalillo County, which since 2017 has been allowed to request that defendants be held in jail if there is “clear and convincing” evidence that they are a danger to the community or might not show up to court again if they’re released.

That data shows that over a four-year period, the district attorney’s prosecutors requested 4,565 detention motions, winning 2,129 of those requests. In 604 cases, the data compiled by the LOPD shows prosecutors went on to dismiss the charge they originally considered serious enough to keep someone in jail while they waited for trial. Judges dismissed 176 of the same types of cases.

Even when judges agreed with pretrial detention, 22% of the cases did not result in a conviction. That’s a rate Chief Public Defender Bennett J. Baur finds unacceptable.

"Find solutions that are based on evidence and not just upon the trend of the moment or kind of panicking in response to these problems," said Baur, himself a former prosecutor who worked on cases involving crimes against children.

The governor rebuffed the LFC analysis, pointing to two cases where defendants Luis Chaparro and Devin Munford are accused of committing murders while out of jail on pretrial release conditions.

“These are the real-world examples of what we are working to prevent,” said Nora Meyers Sackett, the governor’s press secretary. “In addition, this legislation does not serve only to prevent homicides – it will also prevent rapes and other horrific crimes that leave victims with a lifetime of trauma, and that cycle must be stopped.”

The LFC memo, Nair said, had “fundamental disconnects with that history.”

The district attorney’s office said in a statement that the memo’s findings are “based on a deeply flawed interpretation of available data” such as the recent large-scale dismissal of rape cases due to a massive backlog of evidence kits and the statute of limitations for the crime.

The office said relying on incomplete or skewed data risked giving lawmakers the wrong picture of its efforts to prosecute cases.