ALBUQUERQUE, N.M. — New Mexico is known for its rocks and climbers have long explored the Land of Enchantment for a perfect challenge.

Ollie Kuang, 17, is one of those climbers. Kuang is a La Cueva High School senior and longtime New Mexican who has sharpened his skills at Stone Climbing Gym in Albuquerque.

"I’ve rock climbed since I was 8 years old but I really got into competitions around 2016," Kuang said. "Since then, I’ve won two or three youth national titles and I was been on the U.S. team in 2019 for all three climbing disciplines."

In July, Kuang competed at the Youth National Championship in Reno, Nevada. At the tournament, he earned a spot on the U.S. team and a chance to compete at this fall’s Youth World Championships in Russia.

Until then, Kuang is focused on Olympic sport climbing. Sport climbing, karate, surfing and skateboarding are the four new sports for this year’s Summer Olympics. 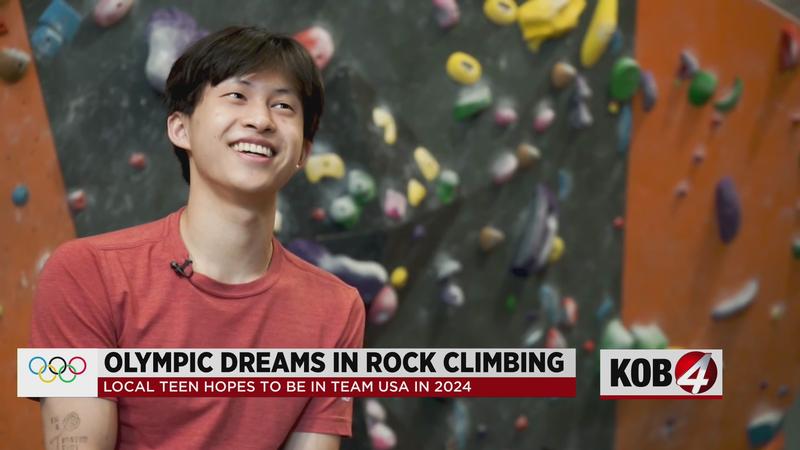 "I think climbing is just a really unique sport and there’s nothing like it," Kuang said. "It’s kind of exciting to be in a sport that really wasn’t big until now."

"The athletes are so physically fit, they do these insane things," Kuang added.

Four U.S. competitors will be competing for the first Olympic gold medal in sport climbing. They will be facing three disciplines that they have to excel in.

The first discipline is bouldering.

"They [brackets] are just kind of shorter climbs," Kuang stated, "they since they are the shortest most intense most complex the most physically demanding they test a wide variety of skills they are not done on a rope as you can see but they all done over a pad."

The second discipline is lead.

"Tall walls anywhere between 40-80 feet and they are climbed on a rope for protection," Kuang explained. "It’s more of a test of fitness keeping yourself focused on the wall and just your endurance."

The third discipline is speed.

"I’m willing to let my dreams go a little further," Kuang expressed, "it is a dream to see what Olympics 2024 would look like."

If Kuang makes it to the Olympics in 2024, he will be doing it with New Mexico on his mind.