RUIDOSO, N.M. — Normally the sidewalks of Ruidoso are crowded with people but that was not the case Wednesday morning.

“It’s very strange not to see people up and down midtown, very strange,” said Brandi Shelby, an employee with Village ACE Hardware.

The hardware store is one of a few places open for businesses in this small resort community that is normally a hotbed of tourists.

Much of downtown Ruidoso was still without power after the same high winds that fanned the McBride Fire also knocked out power and downed tree limbs Wednesday.

Village Ace Hardware was able to get electricity through the use of a generator but the fire was still on everyone’s mind. 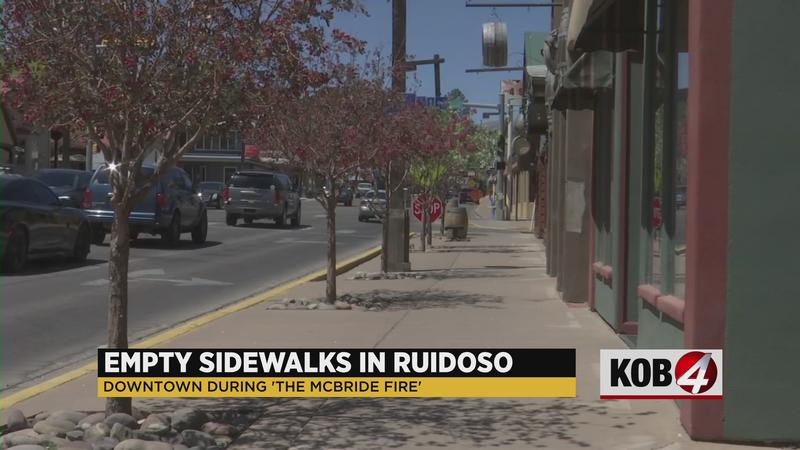 “We are finding out that people, normal people, people who are regulars here have lost everything, lost animals,” Shelby said.

Elsewhere, The Cork & Kettle, a high-end grocery store, like other businesses in downtown Ruidoso could not open due to the lack of electricity.

But owner Laura Doth, and her daughter, were forced to come to the store anyway and work in the dark, cleaning out their dairy products.

“We actually needed to come in because we do have product that is refrigerated. Our dairy cases, we just need to go ahead and clear those out because we’ve been without power now for almost 24 hours,” she said.

The closures and evacuations come, just as businesses were bracing for a flood of tourists ahead of the holiday weekend.

“This was Easter week, so we were anticipating really good crowds starting to come into town” Doth said.

Next door at UltraHealth, Corey Hilyer, manager of the cannabis dispensary moved his merchandise to a safer location. The dispensary, one of many in Ruidoso, was closed.

“We are trying to get this taken care of sooner rather than later so we are not scrambling at the last minute,” he said.

But back at Village Ace Hardware, even though the lights are on, there is an awareness that they will not be immune to the lack of foot traffic.

“If there is no people right now its concerning too. Because those (businesses) that may possibly have power, could still be hurting from this,” Shelby said.

But these businesses are resilient.

Doth said wildfires are something she and other residents take into account when living in the alpine mountains of New Mexico.