ALBUQUERQUE, N.M. — After a string of shootings, one organization is making sure their message against gun violence is seen by everyone driving by.

New Mexicans to Prevent Gun Violence built a wall in the International District as a place to put their latest mural.

“This is our tenth gun violence prevention mural. We have done them throughout New Mexico and they are a way to celebrate every community that we go into, at the same time talk about the importance of not using a gun to solve your personal disputes,” said Miranda Viscoli, co-president of New Mexicans to Prevent Gun Violence.

Viscoli said these messages couldn’t have come at a better time.

“Having two kids, two students this week bringing guns to schools in New Mexico in Albuquerque — getting into a shootout — is dangerous tragic and preventable,” said Viscoli.

Now, the group said they are hoping this mural will build a larger audience than they’ve ever had before.

“This is actually the most public mural we have ever done right next to Zuni, which is amazing,” said Warren Montoya, the facilitating artist.

The design of the mural came about after 12 artists spoke to members of the community, asking them what they have to say about gun violence.

“One of the messages is really peace, it’s a collaborative effort and it really takes a lot of different people to make these projects happen,” said Montoya.

Volunteers will be painting the new mural for the rest of Labor Day weekend, and when they are done, they hope folks will take their message to heart.

“I want them to take away two things, one this is a beautiful community that needs to be celebrated and two we don’t need the gun violence, its time to put down the guns and start helping communities thrive, that’s the message I want people to get,” said Viscoli. 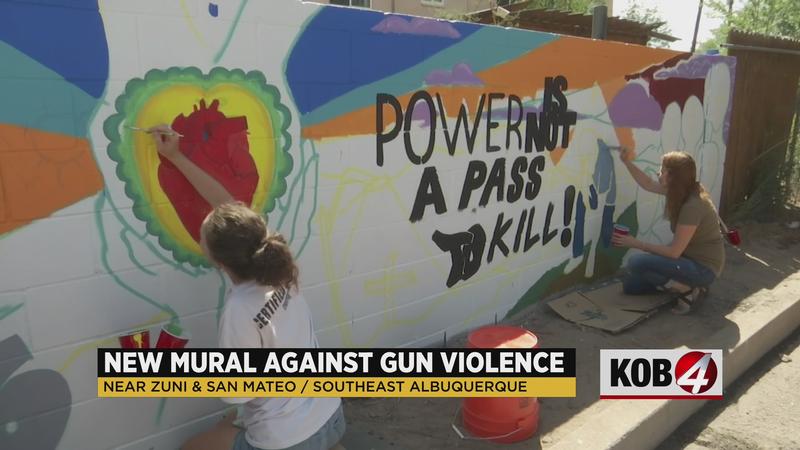