ALBUQUERQUE, N.M. — The city of Albuquerque is on track to set another homicide record this year. The latest homicide occurred early Wednesday at Westgate Heights Park, which puts the count at 37 victims.

A local organization is planning to honor those 37 individuals who have lost their lives this year during a Thursday vigil.

“This is not a new fight. We’ve been fighting for five years,” said Nicole Chavez, a community organizer.

Nicole lost her son Jayden about five years ago. He was killed during a drive by shooting. 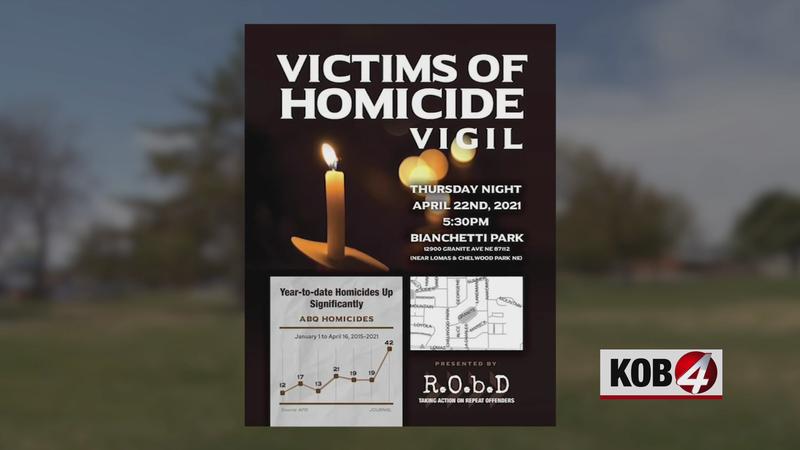 “Again, this is not a new issue. We’ve been fighting it for over five years now, and it seems like our lawmakers are not listening and in fact, this last session they were fighting for a bill that would decrease the amount of years a murderer would be in prison,” she said.

“It’s going to take the citizens in each legislative district standing up, contacting their legislators and saying enough is enough. We need to do something, and if they don’t do that then it’s just going to continue on,” Rep. Rehm said.

Nicole hopes the vigil will not only be an opportunity to honor the people who were killed, but to send a message to anyone listening.

“I plan on being there and hopefully I can talk to some people about what’s going on and hopefully make them aware that we have a big problem in Albuquerque,” she said.

Sam Vigil, whose wife was killed during an attempted car-jacking last year, said crime should matter to everyone. The goal is to prevent it before it consumes everything.

“It’s not acceptable to have the type of crime that we have in New Mexico now," he said. “It’s spreading all over the place and I will, if I have to continue through the rest of my life, I will do it.”

The vigil will begin at 5:30 p.m. at Bianchetti Park. Organizers will provide candles to anyone who wants one. They’re also asking the families of this year’s homicide victims to bring pictures of their loved ones.

“I don’t know how in the world this crime issue has turned into a party issue, but the people that are dying on the streets—they’re Republicans and they’re Democrats,” Nicole added.