ALBUQUERQUE, N.M. — A local pastor who has been stepping up to make his community a better place has been nominated for KOB 4’s Pay it 4ward award.

“I’m just excited for him because I think that he does so much to help everyone it’s nice to be able to help him for a change,” said Virginia Baich.

Virginia Baich nominated James Landry for his dedication to helping others.

“Every week at this location at Grace Thrift Store, he and his group of volunteers give out food boxes to anyone that shows up—no ID required. So he’s been helping people for a year. He also helped start a community garden for kids,” Baich said.

Landry has been teaching kids how to grow their own produce.

“In the South Valley when kids are no longer able to go to school and be with their friends, he organized them so they tilled the land, planted the seeds, and now they’re harvesting all their vegetables,” Baich said.

He’s even teaching them how to prepare and use the produce. There are also plans to start another garden in the International District.

“He and his wife, they got married this year during the pandemic. They help families have a safe place for their kids to go when they have to go to work,” Baich said.

In the beginning, Landry would take money out of his paycheck for the food drive. But now it’s grown so much that they’re helping other organizations around town.

“He just continually gives, and so I’m so excited to see him get rewarded for all of his hard work,” Baich said.

“I wanted to say to give you some recognition for all that you’ve done for our community the last year. Organizing the food drive, giving out to needy families every week, doing the community gardens here in the South Valley, helping kids get through the pandemic, and also helping out here at the thift store and the daycare. So we have something for you,” Baich said.

Landry said they lost a lot of volunteers during the pandemic, but he’s thankful to the people who have stuck around.

“I’m just really thankful for, for good friends who encouraged us, and for people that are doing the work right alongside us,” he said.

As for the Pay it 4ward money, Landry said he wants to share it.

“We might have just a giant barbecue or something and just help everyone because it isn’t just me for,” he said. “We couldn’t do it without our team, so we’ll figure out a way to spread it around and just bless everybody.” 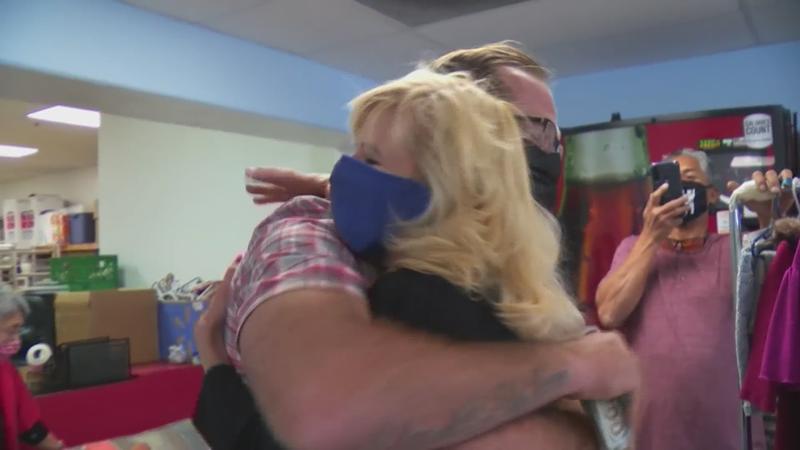