"Just before the border patrol I decided I was going to take some great pictures of White Sands,” she said. “I’m one of those that I collect a lot of stock photos to use later on."

Rhonda was a photographer that turned into a witness.

"All of a sudden this car goes flying by,” she said. “It was so close to me I could’ve reached out and touched it. It scared the living daylights out of me."

She found herself stuck in the middle of a pursuit. She said a black truck was chasing a silver cab car. 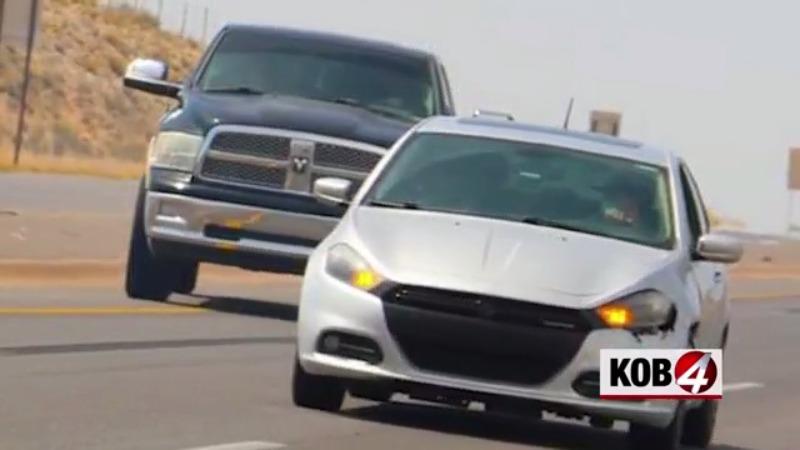 "My adrenaline kicked in and then I started taking pictures,” she said.

"You know that ring around the rosey song? Let’s just say that’s how I felt, but I was in the middle of it,” she added.

Alamogordo Police said they got a call about a stolen cab car from a hotel in town, and that the owners of the cab were tracking it via GPS.

They sent out a “be on the lookout” alert for a black Dodge chasing a stolen Dollar Cab headed west on Highway 70. The pursuit lasted around 15 miles and ended right where Rhonda was.

"The truck, again, tried to cut them off,” she said.

Rhonda said the cars crossed the median twice, turning into oncoming traffic before stopping on the shoulder.

"He jumped out of the car but there was all this smoke from the burning tires,” she said.

That’s when she saw a man and a woman pull out their guns and point them at the person in the cab car. Shortly afterwards, law enforcement arrived.

"He was telling him to stay down or get down,” she said.

The Otero County Sheriff’s Office has launched an investigation, and the owner of the cab company later identified herself to Rhonda as the woman in her photos.

"I just wanted to capture the moment because I knew nobody would believe that it happened,” she said.