ALBUQUERQUE, N.M. – An Albuquerque primary care provider is prescribing Ivermectin to prevent patients from becoming infected with COVID-19, amid warnings from top U.S. health officials about the drug, which is not approved for any viral infection.

KOB 4 reported Thursday that local feed stores have seen an increase in people buying a version of Ivermectin meant for use as a dewormer for livestock, with customers telling employees that they intend to use it themselves.

The version of the drug meant for humans can be found on Amazon, though a prescription is required. It’s approved for parasite infections, not viral infections like COVID.

A source showed KOB 4 reporter Tommy Lopez a message that a patient allegedly received last week, which says a “protocol” “can help prevent COVID-19”, and that it “includes a prescription for” “Ivermectin.” It says “please contact your PCP (primary care provider) for the prescription for Ivermectin.”

KOB 4 spoke over the phone with the owner of the Southwest Integrative Health Center, located in northeast Albuquerque. Dr. Aaron Kaufman says he’s prescribed Ivermectin, but the message came from another provider at the clinic. 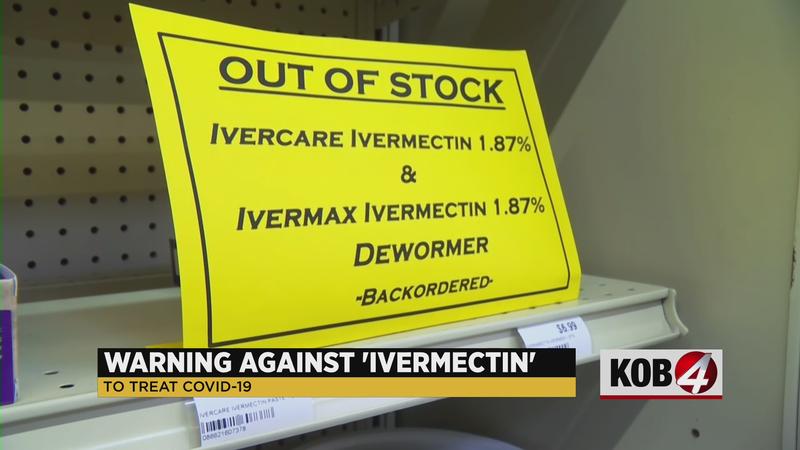 He says there’s nothing wrong with the drug and that he disagrees with the Food and Drug Administration and Centers for Disease Control’s warnings.

Another local doctor told us no one should use Ivermectin for COVID.

“We have not learned that Ivermectin has any utility for the treatment of COVID, and, in fact, we know that the use of Ivermectin in humans at doses you would get at a feed store can be extremely dangerous and can certainly lead to death,” said Dr. Denise Gonzales, medical director at Presbyterian Healthcare.

The New Mexico Department of Health agreed that neither the versions meant for animals or humans are approved for COVID, and they can be dangerous.

A DOH spokesperson says it’s legal for providers to prescribe the human version for COVID. If they do, they have to inform the patient that it’s not approved for that use.

Any concerns about improper prescriptions would need to go to the New Mexico boards of medicine or nursing.

Health officials say the drug has never been shown to combat viruses, and while there have been calls for studies, and the national institute of health is studying it, there’s nothing conclusive right now.

The idea originated from the internet — from anti-vaccination groups, according to NBC News’ reporting.

Many months ago some groups that have tens of thousands of members began trading information on buying and dosing. For the version meant for horses, some even discussed mixing it into jam and eating it on toast.