"I saw her walking through the checkpoint, and it was very emotional,” she said. “We both cried and hugged."

Bohn said she had a bad feeling about where the Russia-Ukraine war was headed when it started in February.

“I really wanted mom to leave and try to evacuate," she said.

However, her mother was initially hesitant to leave her apartment in downtown Zaporizhia. Surrounded by walnut trees her husband planted, it was the home where they got married and raised their two daughters together – and where he passed away last fall. 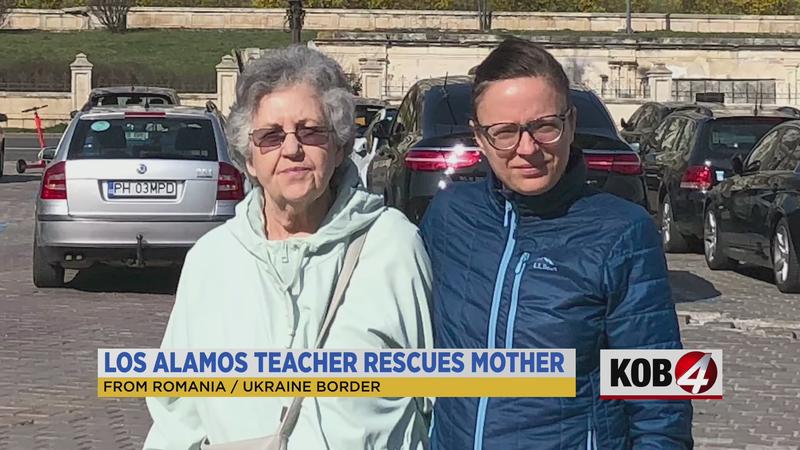 "She was clinging to the familiar," Bohn said, "and she was in really bad health too."

Bohn knew if there was any chance for her mother’s survival, she needed to leave soon. Finally, in the first weeks of March, her mother agreed to evacuate.

"She left with a really small bag and she left everything, all her possessions, behind,” Bohn said. “She took just her documents and her medications."

While her mother traveled by car across Ukraine for several days, Bohn began her journey from New Mexico to Romania.

"I had no money for the trip and, in two days, people kept coming to my door and bringing money," she said, "There was a person who purchased the tickets and, like, everything – like the financial side was just miraculously resolved."

With a lot of help from the Los Alamos community, Bohn finally met her mother safely in Romania on the morning of March 15, but the rescue mission did not end there. They still needed to get back to the states.

"We had to travel all the way to Frankfurt, Germany, and wait there, possibly for months, to finish the processing of her visa," Bohn said.

Bohn knew she could not be away from her family and job for that long, so she wrote to U.S. Sen. Ben Ray Luján’s office for help. The New Mexico senator’s team did not hesitate to get the ball rolling and immediately wrote to the U.S. Embassy in Bucharest.

"They basically gave us a visa within one week," Bohn said.

KOB 4 also spoke with Sen. Luján about his involvement.

“While there are many responsibilities we have, legislatively and traveling the state, the most important – as I always say – is working with constituents,” he said. “It shouldn’t take a U.S. Senator or a U.S. Representative having to call and intervene in these cases, but in this case, because we were able to work directly with the family, the State Department and others, and the family did everything that they were asked to do, we were able to get them reunited sooner.”

Sen. Luján added that he is glad the family is back together and he is honored to have played a small part in making that happen.

The good fortune did not stop there. The same person who anonymously purchased Bohn’s plane tickets to Romania, also paid to fly her and her mother back home.

"It was an amazing string of miracles and now my mom is in Texas, she’s doing much better,” Bohn said. “My sister is helping her take care of her health issues and taking her to doctors."

To the many people who helped make it all possible, Bohn only has one thing to say – ‘Thank you.’