ALBUQUERQUE, N.M. – On Wednesday, the Supporting Teachers and Families initiative went into full effect as both National Guard members and even Gov. Michelle Lujan Grisham filled in as substitutes at New Mexico schools.

The halls of Los Lunas High School felt like any other school day, and that was the goal of this new program.

KOB 4 got a special look into a math class at the high school, where Amariah Jiron was teaching in civilian clothes. She is one of nearly 70 volunteers who signed up through the new Supporting Teachers and Families, or STAF initiative, that was announced last week.

“I believe our students and family have a lot of respect for our National Guard troops. These guard troops are a part of our community and for them to come into our school and help us out is a huge relief,” Los Lunas High School Principal Paul Carder said.

A spokesperson for the New Mexico National Guard explained they will be focusing on rural areas and any state employee in the program will fill in at schools in the metro or Santa Fe. Jiron graduated from Los Lunas back in 2015, so when she was asked where she wanted to go she chose Valencia County.

“She was one of my students at one time and she is in a classroom where she had a teacher that she had previously, as well. The students see that, they understand that, they see that community, if you will, and I think it is important,” Carder said.

When these students found out there were going to be one of more than 20 schools getting help from the National Guard there were mixed reactions.

“My first reaction was that is kinda strange cause they have different priorities about protecting the country and this and that but we have to do what we have to do,” Senior Jose Avila said.

“I just thought that’s going to be cool and I can’t wait to talk to them and get to know them,” Junior Joseph Trujillo said.

These students are no strangers to substitutes, especially lately. With omicron spreading, New Mexico’s teacher shortage is becoming more apparent.

“I can’t think of a time that we were ever as short as we are right now, both regular teaching staff and substitute teachers,” Carder said.

And students notice this new strain on their schools.

“It’s been pretty awkward and interesting just going to school or going online unexpectedly, it’s been really back and forth,” Trujillo said.

But now, with the STAF initiative rolling out, school leaders are thanking the governor for this temporary solution.

“I really appreciate the fact that she is being proactive and trying to help us out and this outstanding idea, and sometimes you have to think outside the box and I think that is what she was doing with this,” Carder said.

Los Lunas was assigned two Guard members to fill in where ever the school needs them from core classes like math and English to electives like Spanish or anywhere in between.

Guard members are scheduled to stay in schools through March. 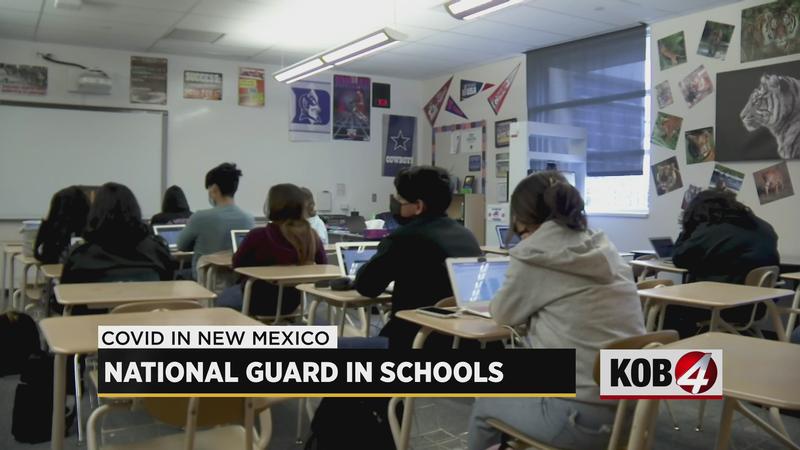