Love and baseball: A couple’s chance meeting at an Isotopes game

ALBUQUERQUE, N.M. – Baseball may be out of season but love never is – especially for one couple who cites baseball as the reason for their love.

Six years ago, Stephen Baros sat down at an Albuquerque Isotopes game and met his future wife.

"I still remember when I turned and was just like ‘Oh my gosh,’" Stephen said.

However, it wasn’t a date – it was just pure fate.

"My dad is a huge Holly Holm fan and we came out to the game to see Holly was going to be here," Stephen recalled. "My parents made sure they were one of the first 100 people in line to get a Holly Holm bobblehead." 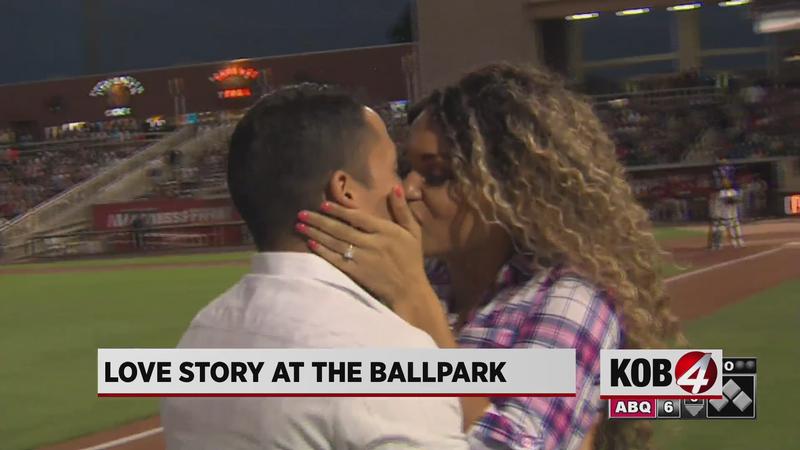 "For myself and a group of friends, it was in celebration of my soon-to-be 30th birthday," Lillian remembered, "and I didn’t want to do the average – I wanted to do something a little more fun so I said ‘Let’s go to a game!’"

It was in the ballpark seats where they met through mutual friends.

"I wasn’t expecting to meet literally the most beautiful and most amazing woman I’ve seen in real life – I didn’t plan on it," Baros remarked.

Stephen says he started referring to Lillian as ‘Isotopes Girl’ and snapped a photo of her.

However, it wasn’t a home run for the couple right away.

After months of talking, Lillian says Stephen tried to friend-zone her. Then, after Stephen came to his senses, they officially started dating.

After dating for a few years and coming back to games every year as a tradition, Stephen came up with an idea of how he wanted to propose. Stephen enlisted help from the Isotopes, who helped him set up the ultimate surprise for Lillian – getting engaged at the same place they met.

‘I was just in total shock," Lillian stated. "It was something that I knew, that I loved him, so it was like a dream come true. It was really precious."

Stephen and Lillian may not have stolen any bases but they did steal each other’s hearts.

The couple has been married since 2019 and is expecting a baby girl in May.