ALBUQUERQUE, N.M. – APD is looking for a suspect who they say went on a violent crime spree overnight.

The suspect is accused of breaking into three homes, stealing four different vehicles, kidnapping three people, shooting at multiple bystanders and driving the wrong way on I-40 during the spree.

The spree began around 11:20 p.m. Sunday when, police say, a suspect stole a work truck from a business at Iron Avenue SE and Elm Street SE. The truck later crashed in the area of Gibson and I-25, where a bystander checked on the driver but the driver fired a shot at them before fleeing on foot. 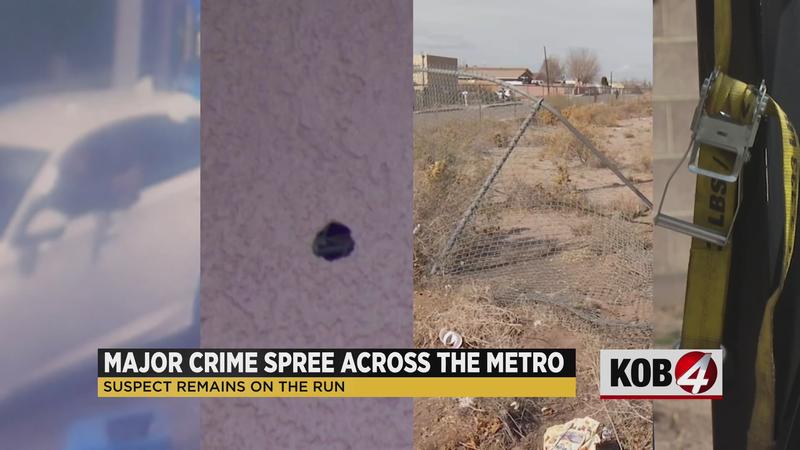 The suspect fled on foot toward the area of Elm Street SE and Thaxton Avenue SE where he allegedly broke into a home, abducted a woman and took her vehicle. Officers discovered this when responding to the home shortly after midnight.

APD also detailed an account from BCSO deputies who were flagged down around 2:25 a.m. by women who said they were abducted from a gas station at Gibson and Carlisle while they were pumping gas. The women said the offender fired a gun at them before they were abducted.

APD responded around 3:20 a.m. to a home burglary in the 1000 block of Chama Street NE. The suspect injured the homeowner and barricaded himself in the garage before leaving with the homeowner’s silver Toyota Prius.

Just east of the Chama Street home, officers found a white Honda suspected to be stolen from the Willow Run Drive home. Officers also located the silver Prius, which officers followed as it went the wrong way, westbound, on eastbound I-40.

Officers traveling westbound saw the suspect exit at Unser Boulevard with the Prius, which was last seen headed north from I-40 toward Fortuna.

APD is still searching for the Prius and following up on leads about the suspect.