ALBUQUERQUE, N.M. – An innocent bystander was swept up into a crime spree in Albuquerque late last week as he was just trying to do his job at the Sunport.

The suspect, Kevin Donovan, had a short court appearance Saturday after police say he stole a vehicle at the Sunport, kidnapping the man who tried to stop him, then leading police on a chase all across the metro.

Luckily, the chase ended peacefully. But for the victim, Austin Ochoa, he says it was a frightening and chaotic experience.

On Thursday Ochoa was just doing his job at the Sunport, delivering lost luggage to travelers, when a man jumped into the car he was loading up

“That was 7 o’clock only one hour into my shift,” Ochoa recalled. “I was loading up her vehicle and she came around to give me a hug and that’s when here front door, I guess, was open, and when she gave me a hug this guy jumped in.”

Ochoa was quick to tell the suspect, Kevin Donovan, to get out of the car but he soon found himself trapped inside as he drove away.

“I had my body kind of halfway in halfway out but then he just took off and then I realized the situation I was in and I started to panic,” Ochoa said.

According to the criminal complaint Donovan drove onto the interstate, that’s when Ochoa noticed his kidnapper had a full tank of gas, so he repeatedly asked to be let out of the car.

After driving up and down I-25 and I-40, Ochoa saw a chance to escape.

“He got off on the San Mateo exit and drove slow enough because of the traffic that I unbuckled and jumped and got out of the car,” Ochoa said.

The criminal complaint goes on to say police found Donovan and the car on the way to Isleta Casino. Officers followed him back up to San Mateo and Osuna, where they were able to pop both back tires, but that didn’t stop him.

Donovan then drove on the rims of the car all the way to Rio Rancho before turning around and eventually being arrested near Westside and Golf Course.

While Ochoa says he is relieved his kidnapper is now in jail, he still feels for all the other folks impacted by this crime spree.

“That lady, she is a traveling nurse and she came here to help out she didn’t come here to get her stuff taken from her,” Ochoa said.

KOB 4 also reached out to the Sunport to talk about this incident and they said in a statement:

“Safety and security are always top priority at the Sunport. Thursday’s incident was isolated, however, we have added additional patrols for both Securitas and APD on both arrivals and departures.”

Ochoa adds he’s always felt safe at the Sunport and at the time of the kidnapping he saw multiple security guards rushing towards the car as it drove off. 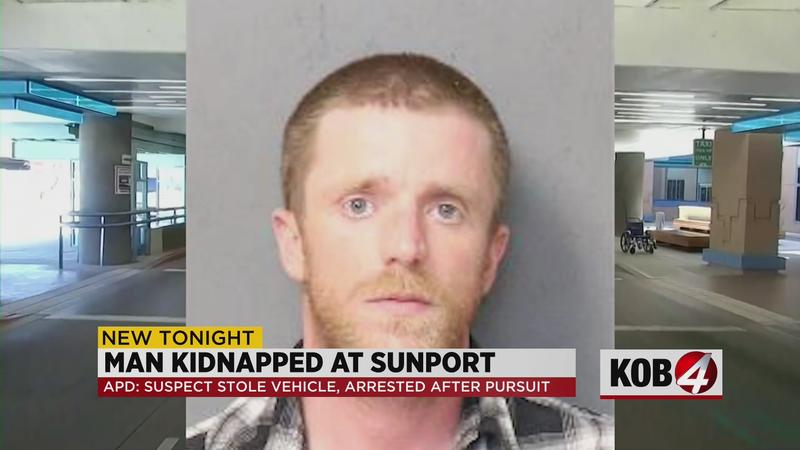