ALBUQUERQUE, N.M. — The Perseverance Rover, which launched for Mars last summer, landed successfully on the Red Planet in February. Just a few days ago, the helicopter that was attached to the rover also had a successful landing, and is ready to see what it can discover about Mars.

"If we’re able to fly, it’s the first powered aircraft on another planet,” said Josh Ravich, a mechanical engineering lead for Ingenuity.

The Ingenuity Helicopter is now waiting to take its first flight after overcoming some of its biggest obstacles. First, the aircraft had to detach from the Perseverance Rover and survive the freezing cold temperatures, which can sometimes reach lows of 130 degrees Fahrenheit below zero.

A solar array that sits on top of Ingenuity takes in energy from the sun to charge a battery pack at the bottom of the vehicle.

"That’s where we get our power overnight to heat the electronics, heat the battery to stay at a reasonable temperature range,” Ravich said.

One of the many goals of Ingenuity is to fly in very low atmospheric pressures, like Mars.

"Flying on Mars— it’s a really thin atmosphere,” Ravich said. “The equivalent altitude would be like if we were flying at like 100,000 feet on Earth."

To put that into perspective, that’s more than three times the height of Mount Everest.

"We actually included on the Ingenuity a small swatch of fabric from the original Wright flyer that sent up there with the vehicle, so it’s kind of a tie in and commemoration of the first flight,” Ravich said.

Ingenuity’s first flight is set to take place April 11. The goal is to take a total of five flights. 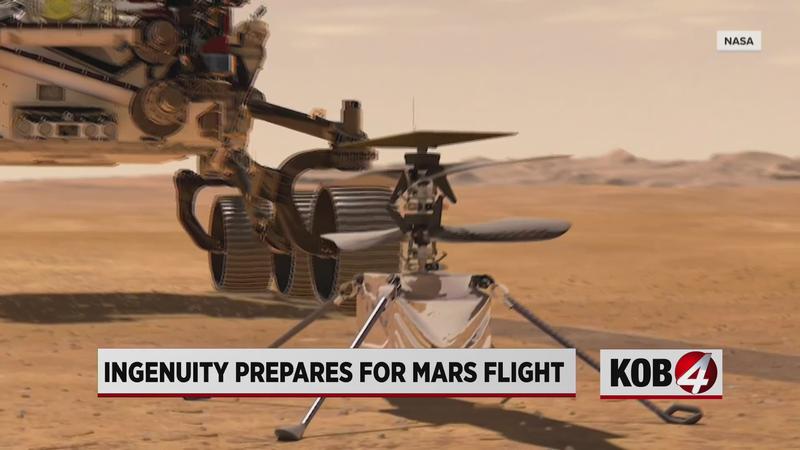