RIO RANCHO, N.M. — This Saturday, the parents of a New Mexico teen are bringing back a CrossFit competition and fundraiser to raise awareness for a cause near and dear to them.

Five years ago, McLaren Jonas died by suicide. Now his parents, Suzanne and Tim Jonas, are bringing back the McLaren Cup competition as a fundraiser event to raise awareness for suicide prevention May 7.

At 15 years old, McLaren Jonas – better known as Mac – was a typical teenager. 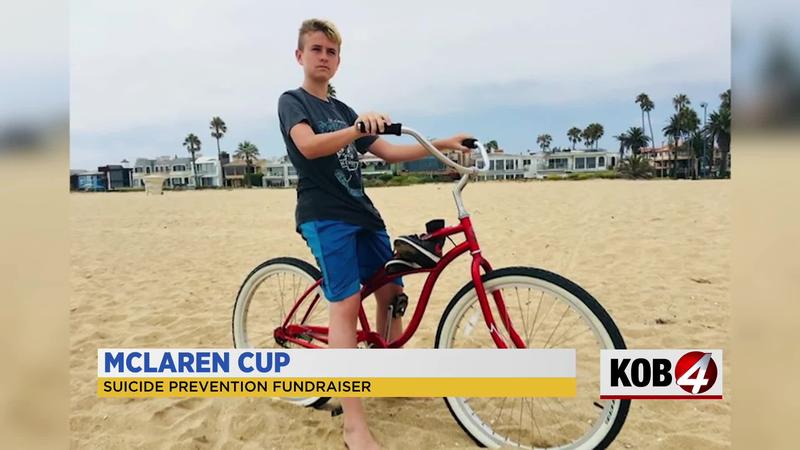 “He never talked about suicide, he was always a happy kid,” Tim described. “He had never gotten in fights. It didn’t seem like he was ever in trouble with it.”

Mac’s parents have since dedicated their lives to suicide prevention.

In 2019, they held the first McLaren Cup, a CrossFit competition and fundraiser.

“Our CrossFit community has just been wildly supportive of us,” Suzanne said.

The pandemic prevented any events over the past two years but, this Saturday, the McLaren Cup is back.

“One thing we really want to say to the youth today is that, if you’re feeling down, if you’re feeling overly lonely or lonely at all, reach out to somebody that you trust, reach out to your parents and to your teachers or counselors or even your friends,” Suzanne said. “What I would like to say to the friends is, if you have a friend who comes to you and says, ‘I’m feeling really down, I’m feeling like I don’t matter,’ don’t just blow it off.”

This year’s proceeds will go to Ten-82.

Tim and Suzanne are each first responders. Suzanne is a nurse and Tim is a firefighter of 29 years. Since the pandemic, he says he’s seen a lot more troubled or lonely kids.

“When we lost McLaren, they were really really there for us,” Suzanne said.

At the end of the event, both high schools in Rio Rancho will also compete.

“It was so amazing to see so many kids come out,” Suzanne said. “Afterwards, they all sat down on the grass – all the football players together – and they listened to us. It was just so, so wonderful and meaningful, so I know it’s gonna be even more so now after the pandemic.”

The McLaren Cup goes from 9 a.m. to 2 p.m. Saturday at the main Rio Rancho police station, at 500 Quantum Road. The event is being held in partnership with CrossFit Rio Rancho.

There will be food trucks and you don’t need to compete to take part. It’s $1 to go and $20 to compete in teams of two.