ROSWELL, N.M- It is a scenario that is all too common on America’s streets.

A crash caused by an intoxicated or distracted driver, a careless moment that ends and shatters lives.

“The security guard came out, these first two cars were broke down, so he came out to help them jump start the vehicle, when upon doing so the vehicles were struck, causing him to go onto the hood,” Lt. James Manson of the Chaves County Sheriff’s Office said Wednesday morning outside Roswell High School.

The area in front of the high school was cordoned off by police, while the cry of sirens from ambulances and fire trucks could be heard pulling up to the scene.

Fortunately, this particular crash, caused by an intoxicated driver, which left multiple people dead and injured, was not real.

It was a simulated crash, put on for area high schoolers through collaboration of local law enforcement, first responders, educators and volunteers.

The depiction was complete with actors and fake blood, empty alcohol bottles and shattered glass. But also the sights and sounds and consequences that are the sad hallmarks of such a tragedy.

Later that day, those students also attended a mock trial of the driver who caused the accident, as well as a mock funeral and burial for those who died in it.

The staged crash was orchestrated by “Every 15 Minutes,” an organization that is named after a statistic that every 15 minutes someone in the United States dies from a crash that was caused either by someone intoxicated by drugs or alcohol, or who is texting or using their cellphone while behind the wheel.

“The core message of this program is saving lives. Let’s make a difference. We lose too many young people due to drugs, alcohol and cellphones while driving,” said Diane Taylor, Chaves County prevention/ specialist.

She says the staged events are meant to drive home the message that impaired driving can have a tragic ripple effect on those involved and their families.

“What we want them to see is this is the crash that was preventable. This is what happens. How first responders have to come clean up the bodies, law enforcement have to come attend to these bodies, They also have to be the ones that go knock on the doors and let the parents know they lost their son or daughter,” Taylor said.

The program is put on every year, and Taylor said, she has seen that it does have a positive impact on many of its intended audience.

“We have kids who are now adults that come forth and say ‘hey, I want to help, that program made a difference in my life, it turned my life around,” Taylor said. 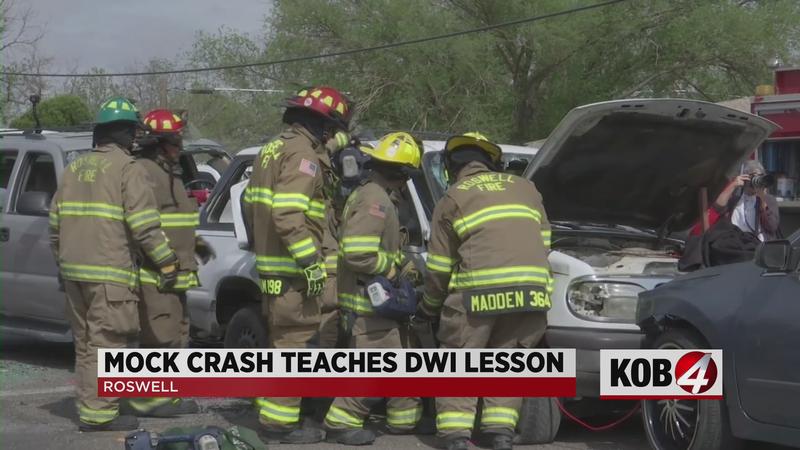