ALBUQUERQUE N.M. — In May, nearly 78% of New Mexico was in the two highest categories of drought. Now, only 23% of the state remains in those categories.

Eastern New Mexico has seen the most improvement.

"The rainfall that we’re seeing in parts of south central and southeast New Mexico is definitely in the records and it’s setting new records in some cases," National Weather Service Meteorologist Kerry Jones said.

From January through April, less than one inch of rain was recorded at the Roswell airport. However, since May 1, the airport has reported more than 13.5 inches of rain.

"It’s the second wettest kind of in modern history. There’s only one other year, 1981, that was wetter in Roswell – just looking at that May 1 to the current period,” Jones said.

Since June 1, parts of south central and southeast New Mexico have picked up between 1.5 feet to nearly 2 feet of rain. 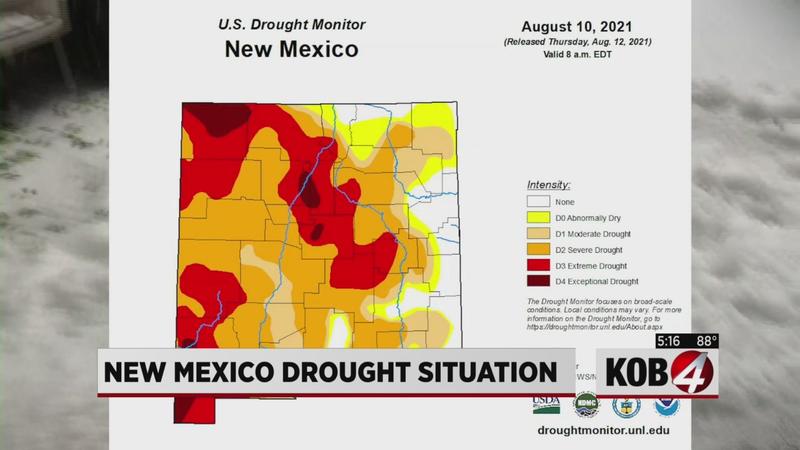 Albuquerque is currently still in D2 and D3 drought. D4 is the highest category.

"Parts of the metro, we’ve kind of missed out on the big storms. I mean there’s been pockets certainly and the airport is no exception. Even the airport for the year, we’re still about an inch and a half below average,” he said.

What these areas, including Albuquerque, really need is to finish out the summer and fall strong and then have a great winter. However, that might not happen.

"We’re looking at what may be kind of a repeat La Nina pattern setting up for the upcoming cold season so that’s generally not good news for us. I mean the odds are tilted towards drier than average," he said.