ALBUQUERQUE, N.M. – As of right now, close to 60,000 film workers across the country will not go to work next week. That includes more than 2,000 workers in New Mexico. This comes after the International Alliance of Theatrical Stage Employees (IATSE) announced it will begin a nationwide strike Monday, Oct. 18 at 12:01 a.m.

A strike can be avoided, if producers can negotiate better working conditions, livable wages and benefits in the next five days.

"I think people have realized the importance of being safe and having safe conditions and having sustainable benefits and the ability to prepare for retirement and a future,” said IATSE Local 480 President Liz Pecos. “These needs have to be met, if we’re going to continue to make motion picture and television."

Local 480 is the union hub in New Mexico. Pecos said thousands of workers in our state voted in favor of a strike.

"We had a historical voter turnout with our members approving in the state of New Mexico, 93% voter return and 99% approval, with an authorization to strike,” she said. “So, it’s very clear that our core issues need to be met."

Pecos added that the strike will pause 7 out of 9 productions currently shooting in New Mexico.

She also said the last time this happened was during World War II, so there is no telling how long workers will strike or how many future productions will be affected. 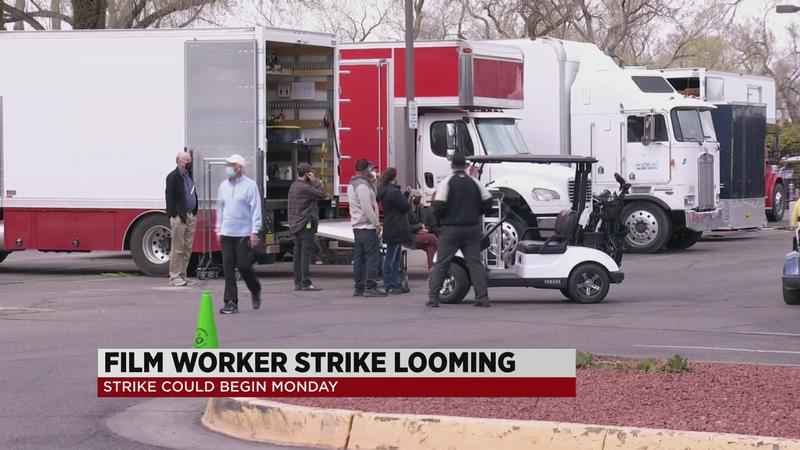 “This is new territory for us, so we don’t have a crystal ball,” she said. “We don’t know how long this will last. It would be until we can reach an agreement and until we can get back to work with a fair deal and a fair contract.”

KOB 4 reached out to the New Mexico Film Office for comment. Officials sent this statement:

The film and television industry is a key sector of New Mexico’s economy, which is driven by thousands of New Mexicans who make up the nation’s best and hardest-working crew base. New Mexico’s crew is the heart and soul of each production filmed in our state. We stand with workers seeking to protect the safety of one another, improve the conditions of their employment, and who fight for the collective benefit of their colleagues. Supporting our crew is essential to carrying this thriving industry into the future. We hope that an agreement between the Alliance of Motion Picture and Television Producers (AMPTP) and the International Alliance of Theatrical Stage Employees (IATSE) can be reached swiftly and the issues at hand are resolved so that this thriving industry benefiting so many New Mexicans and New Mexico communities can continue operating.

Pecos says anyone who wants to get involved can visit local480.com. They have more information on the strike, as well as locations and times for upcoming picketing events.

"We invite New Mexicans to come and support us and stand with us for however long it takes to get a fair deal,” Pecos said.