ALBUQUERQUE, N.M. — More than a dozen APD officers quit the Emergency Response Team (ERT) following a counterprotest over the weekend.

"This comes down to a lack of trust,” said Shaun Willoughby, president of the Albuquerque Police Officers’ Association.

Seventeen officers, one lieutenant, and two sergeants resigned from the team that handles protests. According to Willoughby, he said his officers feel over-scrutinized, so they decided to take a stand with each other.

Willoughy said the resignations stem from the protest that happened on Civic Plaza over the weekend. During the protest, officers said an armed man was taunting demonstrators, so APD field officers detained him. At the time of his detainment, the man was not charged. 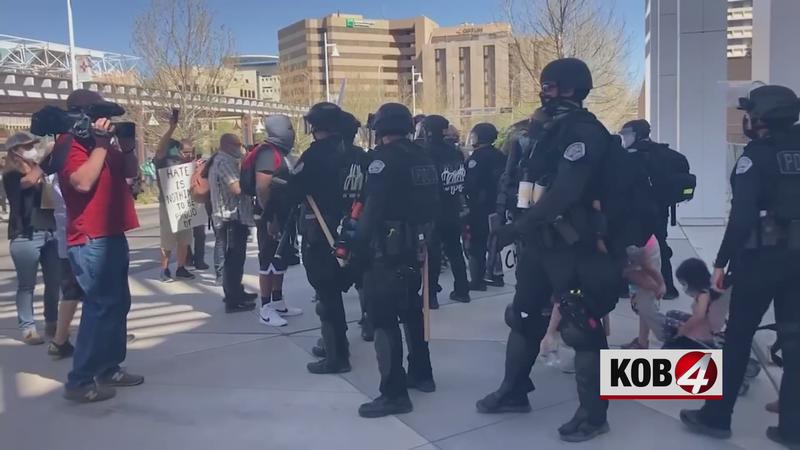 APD officials later reversed that decision, and put an officer on leave for the day to conduct an investigation. APD said there was a breakdown in the chain of command about whether charges would be pressed against the armed man.

An APD spokesperson sent KOB 4 the following statement about the incident:

"Chief Medina made it clear that we cannot have a breakdown in communication during critical incidents. We have worked hard to earn back the public’s trust. We will lose that trust if we resist accountability and culture change."

The Albuquerque Police Officers’ Association believes APD’s priorities are compliant with reform efforts, but they feel that crime should be the focus.

"I think Mayor Keller needs to make a serious decision of what this police department’s priority structure is,” Willoughby said. “I think that he needs to carry that sentiment down to the police chief, so that your police officers feel supported."

Aside from the Emergency Response Team, Willoughby said many people have left the department altogether. Around 20 officers have quit over the last two months.

APD said the resignations won’t impact crowd control operations in the future. They also reiterated that the officers who resigned from the ERT did not resign from being an officer at the department.