Murder suspect to remain in jail until trial

ALBUQUERQUE, N.M. – It has been more than two years since Jacqueline Vigil, the mother of two New Mexico State Police officers, was senselessly shot and killed in her Albuquerque driveway.

Authorities say Luis Talamantes-Romero was stealing cars the morning Vigil was killed. In June of this year, he was indicted for her murder. A judge ruled Tuesday evening to keep him in jail before his trial.

"I will find that state has shown by clear and convincing evidence that Mr. Talamantes-Romero is dangerous," Judge Britt M. Baca Miller said. "There are no pretrial release conditions that would reasonably protect the safety of others."

Judge Baca Miller said, even if she did not rule to keep Talamantes-Romero behind bars in New Mexico, he would go straight back into federal custody in Texas. He was arrested by ICE in San Antonio for illegally re-entering the U.S. after being deported in Sept. 2019. That was only two months before Vigil was killed.

Talamantes-Romero faces 20 years on the illegal re-entry charge and was supposed to be sentenced in May 2021. Federal courts decided to postpone until his first-degree murder case in New Mexico is resolved. That means, once his trial for Vigil’s death is over, he will be sent back to Texas. 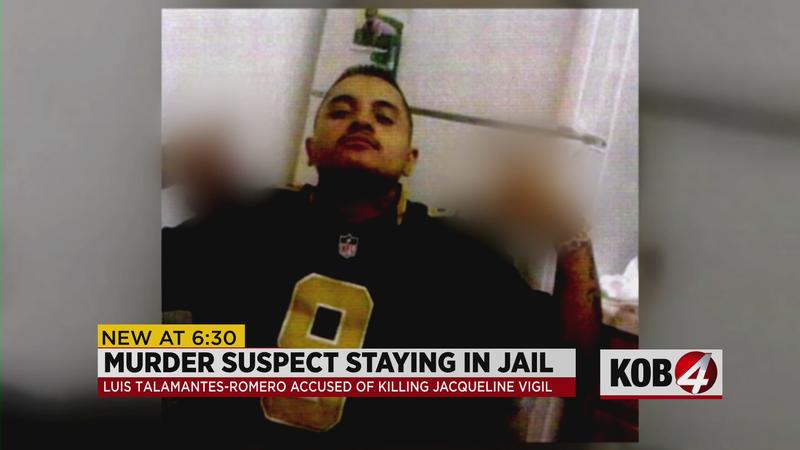 On Tuesday, the defense attorney for Talamantes-Romero argued it would be unnecessary for the state to hold him, since he already has a federal hold. Prosecutors said they do not want to take any chances.

The state also argued it would be easier to move forward with the murder trial, if Talamantes-Romero stayed in New Mexico. The judge agreed.

Talamantes-Romero will not return to court until July 2022 when the judge and attorneys are set to go over all the details in his case.