ALBUQUERQUE, N.M. – The National Association for the Advancement of Colored People held a news conference Saturday to talk about stopping youth violence.

The family of Bennie Hargrove along with leaders with the NAACP and state Rep. Pamelya Herndon were also in attendance for the press briefing.

It was just over two weeks ago, when Hargrove was killed by another student at Washington Middle School. This is the first time hearing from the family since the shooting.

“I miss my son, very hurt he had to lose his life. Would like the world to know that being bullied, this is the outcome of it. We’ve got to do something to stop this around the world. Me and my family would like to thank all of you very very much,” said Collette Wise, Hargrove’s mother.

“I would like for the world to know and the kids to know that being bullied, this is the outcome of it and we have to do something to stop this,” said Wise.

She and others spoke at a press conference hosted by the local NAACP, calling for a change.

"We will work in concert to ensure that justice prevails and a complete and in-depth investigation is completed by the Albuquerque Police Department and the District Attorney’s Office,” said Dr. Harold Bailey, president of Albuquerque NAACP.

The suspect, 13-year-old Juan Saucedo is currently in custody for the murder. Police said he used his father’s gun to carry out the attack.

He was recently ruled unfit to stand trail and will now take part in a competency hearing in September to see how the legal process will move forward. But the attorney for Collete Wise (Bennie’s Hargroves mother), Adam Oakey, said they are looking at taking legal action not only against Saucedo, but his parents and the school.

"We need to make sure that everybody that was part of the puzzle of this tragic incident is held accountable. So we urge the city to file charges against the father and urge the middle school to take some responsibility,” said Adam Oakey, attorney.

He claimed the school was aware of what was happening before the shooting and did nothing.

“The problem is Washington Middle School was on notice of this. He had done some things the day before and a few days before that he should have been suspended under the school policies, they never did that so they were on notice that this could happen,” said Oakey.

He believes this tragic situation could have been prevented.

"Had they suspended Mr. Saucedo, it’s very likely this would not happen,” said Oakey.

Hargrove’s funeral is happening Saturday, Sept. 4 at the Duke City Church at 11 a.m.

It will be open to the public. 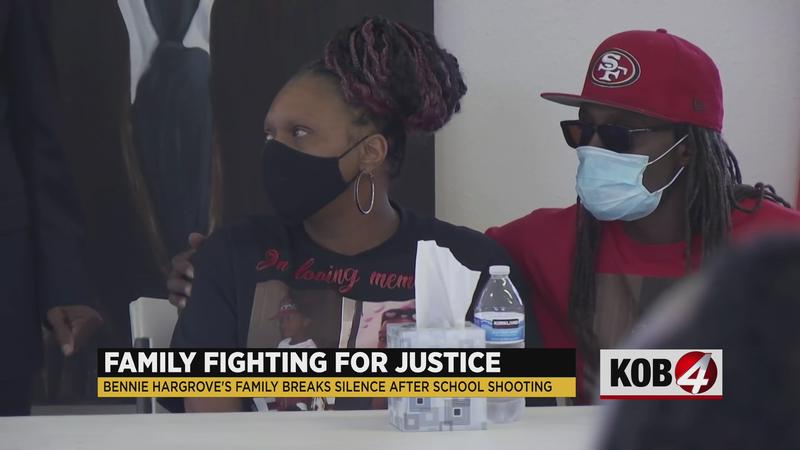