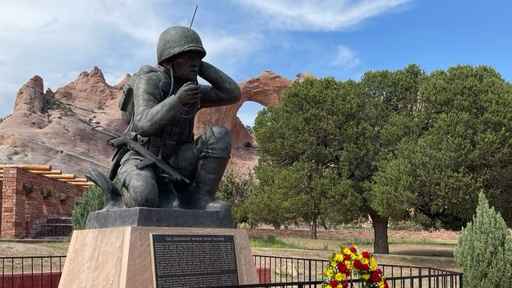 “We pay tribute to the Navajo Code Talkers for their courageous service in World War II. At the time of their enlistment, they were very young men, but they answered the call of duty and unknowingly built a humble legacy for the Navajo people that is recognized throughout the world. By using Diné Bizaad, our Navajo language, they helped to win the war and protect the freedom that we have today. Today, we have the opportunity to carry on their legacy by speaking and learning our Navajo language. Many of our warriors have gone on to their final resting place, however, their service and leadership will forever live on in our hearts and memories," said Nez.

The four guests of honor remained center stage for the virtual event.

"Today, we are blessed to have four Navajo Code Talkers remaining with us including Samuel F. Sandoval, Thomas H. Begay, John Kinsel Sr., and former Chairman of the Navajo Nation Peter MacDonald, Sr. We honor them and thank their families for all of their sacrifices,” said President Nez.

During World War II, the Navajo Code Talkers answered the call to defend the United States of America using the impenetrable code based on the Navajo language that is widely acknowledged as a deciding factor in the war effort. On July 28, 1982, former U.S. President Ronald Reagan designated August 14 as “National Navajo Code Talkers Day.”

“The Navajo Code Talkers define and exemplify the resiliency of our Nation and our people. Since time immemorial, our sacred language has carried on the strength, identity, and growth of our people. Today, remember that each of us carries the same faith and strength of our Navajo warriors," said Lizer.

Navajo Code Talker Peter MacDonald Sr. also highlighted the sacredness of Diné Bizaad, the Navajo language, and the significance of the Navajo traditional songs and prayers that contributed to the country’s freedom. He honored the Navajo Code Talkers that never returned home to their families, and asked the Navajo people to pray and remember them.

"Take this time to offer a prayer for the Navajo Code Talkers, their families, and all the Navajo veterans who defend our country and freedom,” Lizer said.