Neighbors and drivers weigh in on continuous flow intersection

The U.S. 550 interchange is a very different operation for drivers – whether they’ve traveled that area near Bernalillo and Rio Rancho for years or they just head that way once in a blue moon.

Only one crash so far, and people living near the area are giving this new method a green light.

"So far so good, I’ve been happy with the change,” said Jessica Harjo, Rio Rancho resident.

The New Mexico Department of Transportation opened the state’s first continuous flow intersection there this past week. Crews have been working on it for two years, soon after Harjo and her family moved to Rio Rancho.

"It was not as hectic when we first moved here and then when all the construction happened it’s been like gridlock ever since and so we kinda haven’t known what it’s like to have free flowing traffic since we moved here, so hopefully it’ll be a good improvement,” said Harjo.

But some people may feel like they’re back to driver’s ed the first time they travel through the intersection.

Traffic lights now sit further back from the intersection. Drivers turning left going in both directions on 550 will cross in front of oncoming traffic – which is stopped – and head to a new continuous flow lane.

Meanwhile, drivers on 528 turning east onto 550 won’t have to stop.

"We thought it was gonna be extremely bizarre because we couldn’t figure the signs, and what was this lane for and that? But you know, you just flow,” said Tom Skuce, Rio Rancho resident.

Drivers are giving it a thumbs up.

"It’s been a real headache and it’s just taken a long time to get anywhere, but we’re really happy that it’s finally gonna be done and we hope the improvements will help traffic and make things a little bit easier for everybody,” Harjo said.

A smoother route – where the sunset views don’t hurt either.

"I love this area. I’m from upstate New York and this is beautiful. So I wanna stay,” said Skuce. 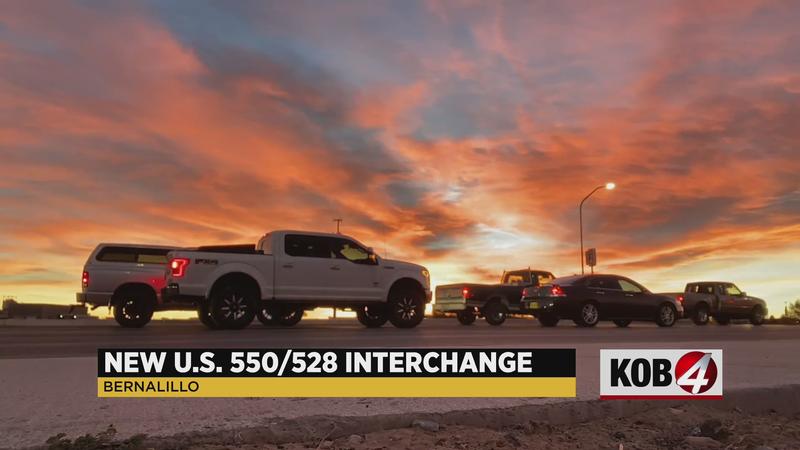