Neighbors share concerns after a series of disturbing encounters

ALBUQUERQUE, N.M. — Residents in northwest Albuquerque are worried a man caught exposing himself on camera could make another unwanted appearance in the metro.

John Reid lives in the Ventana Ranch neighborhood. He said he was walking his dogs Friday morning when a man pulled up to an intersection, parked his car, then opened the door – exposing himself.

The man reportedly shouted obscenities trying to get Reid to look at him.

"I’ve lived a lot of different places, but I’ve never seen anybody be that gross, you know it was terrible,” he said. 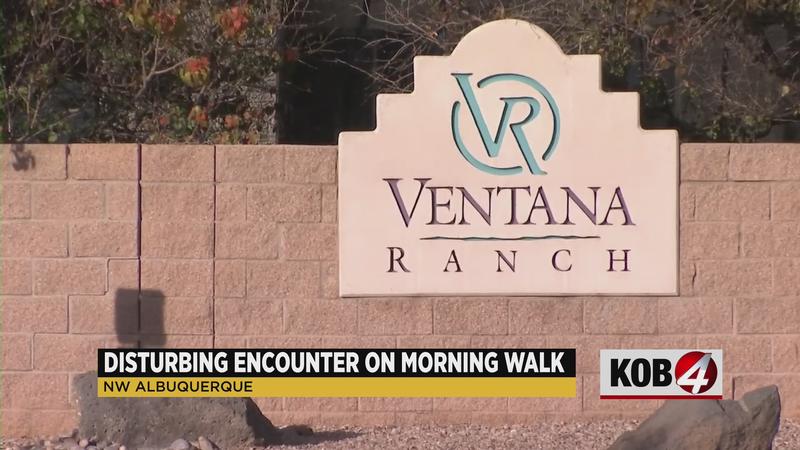 Reid says his dogs were ready to attack the suspect.

“He wanted to go for him, you know I had to hold him back, and I’m beginning to wish I had let him go,” he said.

Reid reported the incident to Albuquerque police but he said officers told him to post the incident on the Nextdoor app.

"The first thing the police told us was to post it on Nextdoor, which is not, like, the kind of response you expect," said a resident who did not want to be identified.

A resident told KOB 4 there was a common thread between the incidents.

"I was really shocked to see that the guy was like in the exact same outfit pretty much,” she said.

Witnesses said the suspect was wearing a black, letterman-style jacket with white stripes on it.

The neighbor said she was glad she was able to figure out those clues herself, but is still concerned with the response from APD.

"It does concern me that we turn to them because everybody immediately wants to tell you, jumps to telling you, call 911, and then you call 911 and they tell you to report this onto a neighborhood app. It’s just a little bit concerning,” she said.

KOB 4 reached out to Albuquerque police for comment. A spokesperson confirmed Friday’s incident was reported, but could not comment on the other reported events or a potential connection.

The spokesperson did not comment on officers pointing residents to the Nextdoor app.