ALBUQUERQUE, N.M. — Some North Valley neighbors are worried a recent decision by Bernalillo County officials could bring the sights and smells of death.

Recently, the Bernalillo County Planning Commission approved a crematorium that would be located on Mountain Park Place off of 2nd Street in northwest Albuquerque. It is surrounded by neighborhoods and the building backs up to a mobile home park that has about 50 units.

"Just doesn’t seem like the right thing to me in this area," said Butch Hext, who lives there. He and many others have been fighting against the crematorium for months.

"Why would we put it in what is typically a large residential area?" said Paul Hauser, who lives nearby.

The main concern is the smoke and smells that come along with a crematorium. 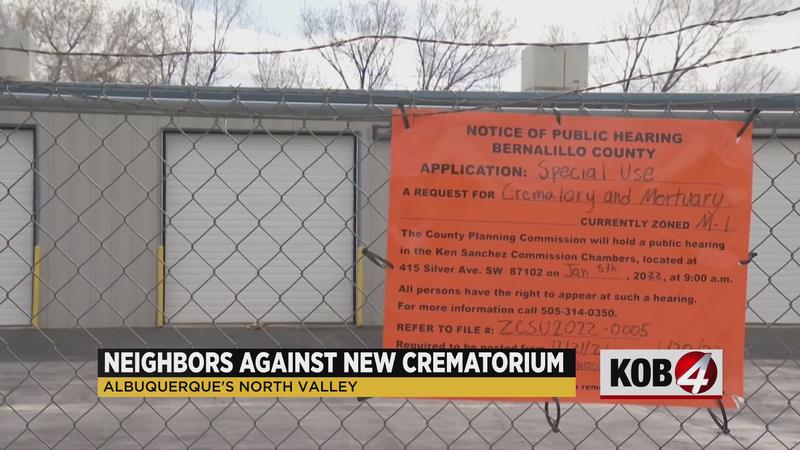 "It’s going to have an impact on our quality of life," Hauser said. "The long term impact on health, safety and the environment."

Not to mention, Balloon Fiesta Park is less than two miles away.

"We are going to have 100,000 people when they are cremating human remains," he said.

However, those smells and sights are something they have already experienced. Right down the road from the proposed crematorium is an animal crematory. KOB 4 obtained a video showing a huge black plume of smoking coming from it.

Hauser said the only interaction he’d had with the man who is trying to open the human crematorium, Michael Monach, is through letters. One letter said Monach has been in the funeral business for 12 years and plans on using state-of-the-art machines that don’t emit the smoke or smell people expect.

In the letter, Monach also wrote about the smell Hauser and others complained about coming from the pet crematorium. Monarch wrote that the smell could, instead, come from the marijuana dispensary next door.

"I distinctly know the difference between cannabis odor and burning flesh," Hauser said.

KOB 4 reached out to Bernalillo County officials about the approval for this crematorium. They said people against it have just a few weeks to appeal the decision – if they get enough signatures, they could petition the issue to the county commission.

County commissioners could decide to send the proposal back to the planning commission to reconsider or deny the proposal. Businesses KOB 4 spoke with Wednesday said they are already gathering signatures.

After our report aired, Michael Monach reached out to KOB 4. Monach says he understands people’s concerns, but said the machines he is bringing in are new, top of the line and different than other crematoriums.

“It basically breaks down all the particulates and any of the emissions that come out of the stack.”

He added that they are within city, state, and federal guidelines. As for the pet crematory that is right down the road, he claims his machines won’t release a smell people associate with the pet crematory.

“There is no flesh smell,” Monach said. “I don’t know how else to put it.”

It will be a few more months before Monach says his crematorium will be up and running.