ALBUQUERQUE, N.M. — One of Albuquerque’s newly-elected city councilors is pushing to be sworn in before next year.

Louie Sanchez won the District 1 election against Lan Sena in November. He won with a nearly 11% lead. Sanchez said city law states he should be serving in her place since she was appointed by Mayor Tim Keller in March of 2020 instead of being elected.

"City council represents the people, and we need to make sure that the people are represented based on the law,” said Sanchez.

Sanchez’s term is not supposed to begin until Jan. 1, 2022. Sanchez and his attorney, Tom Grover, claim the Albuquerque City Charter clearly states he should be in office.

"In that scenario, he’s supposed to take office upon winning the election, and that obviously happened in November and under the city’s own charter, he should be holding office right now,” said Grover. 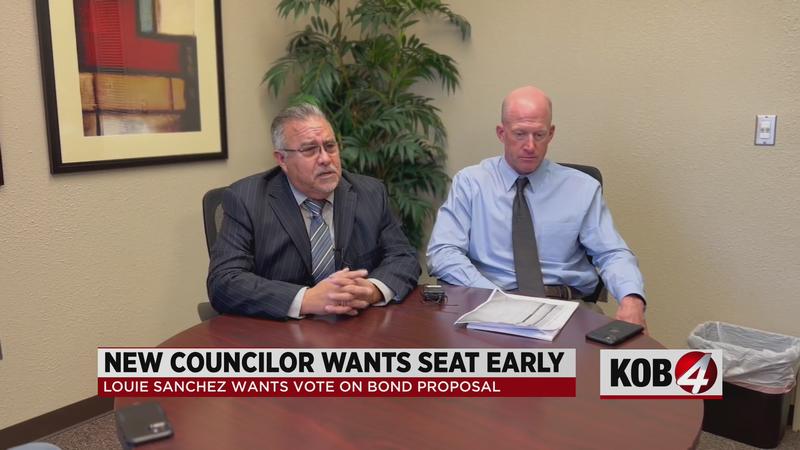 They are citing Article 4, Section 9 which reads:

(a) A vacancy in the office of Councillor occurs upon the Councillor’s death, disability, recall, resignation, removal or termination of residency in the district represented.

(b) If a vacancy occurs in the office of Councillor, the Mayor shall appoint a registered qualified elector of the District to fill the vacancy. Anyone appointed to fill a vacancy shall serve until the next regular election, at which time a person shall be elected to fill the remaining unexpired term, if any.

KOB 4 reached out to the city clerk’s office and received this statement:

"The City Clerk has made clear in correspondence with Councilor-elect Sanchez that the term begins on January 1, pursuant to state law. The County Clerk’s Election Proclamation also made clear that that term was 4 years, not more than four years. The Secretary of State has not issued a certificate of election to any of the City of Albuquerque candidates elected in November and the City Clerk cannot swear in any of the candidates prematurely."

Sanchez said he’s concerned about a potential conflict of interest.

City councilors are expected to discuss a $110 million bond proposal later this month. Sanchez believes those discussions should be pushed back until the new councilors are sworn in.

Sanchez said without them, some voters won’t have a proper seat at the table.

“The citizens of Albuquerque need to weigh in, and the way they weigh in is because they elected their new city councilors,” he said.

Sanchez and his attorney said they are willing to take legal action, but hope it doesn’t come to that.