ALBUQUERQUE, N.M. – Some New Mexicans are reportedly taking a drug meant for livestock, thinking it could prevent or treat COVID-19. Health officials say Ivermectin, which is used as a dewormer for horses and cows, is dangerous for humans.

In an aisle at Western Mercantile in Tijeras, next to food and supplements for horses, is a sign that says “out of stock.” The store is all out of Ivermectin — but not because more animals are having parasite problems.

She said the trend started in the spring and really ramped up this summer. 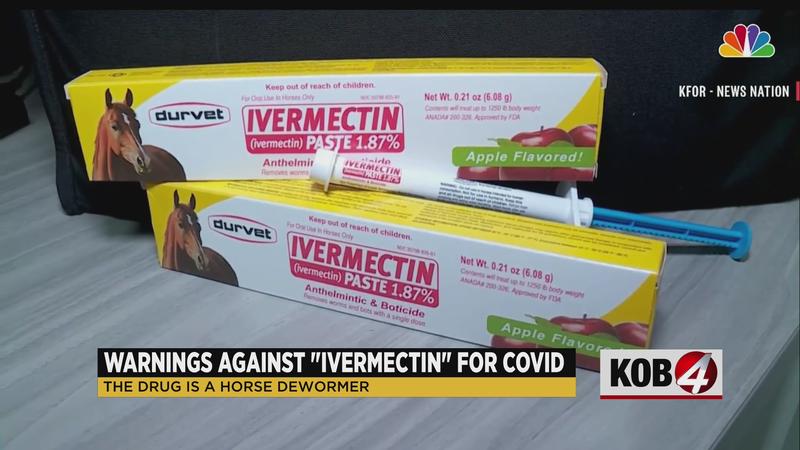 Some people report getting sick. New Mexico’s poison control has gotten 14 calls about it this year, which is more than double last year, and there are similar reports in many other states, including Texas.

The CDC issued an advisory Thursday, warning of a rapid increase in reports of severe illness.

The FDA has warned against its use for months, and recently tweeted: “You are not a horse. You are not a cow. Seriously, y’all. Stop it.”

Dr. Denise Gonzales, Medical Director at Presbyterian Healthcare, said she sees the worst of the worst in the ICU.

“People are on ventilators, and we’re having discussions like, ‘Your loved one may not make it,’ and so they want to look for something to give them some amount of hope,” Dr. Gonzales said.

She said a lot of people have asked her about Ivermectin, but it’s never been studied to treat anything other than worms and parasites.

“We’ve learned a lot in the last 18 months. We have not learned that Ivermectin has any utility for the treatment of COVID, and, in fact, we know that the use of Ivermectin in humans at doses you would get at a feed store can be extremely dangerous and can certainly lead to death,” Dr. Gonzales said.

Doctors do have treatment options for COVID. Dr. Gonzales says they have some success with them.

They now start all COVID patients on Remdesivir and steroids right away. They also consider using Tocilizumab and monoclonal antibody cocktails when needed.

Rep. Yvette Herrell, representing southern New Mexico in Congress, was one of several Republicans who sent a letter to Dr. Anthony Fauci about a month ago, asking about drugs like Ivermectin.

When asked if Herrell advocates its use, a spokesperson said, in part:

“Drugs that show promise should not be withheld or sabotaged by the federal government. Doctors and patients should be in charge of health decisions, not Washington politicians.”