ALBUQUERQUE, N.M. (AP) — New Mexico residents who get vaccinated against COVID-19 will now be eligible for a $100 incentive as the state began a hard push Monday.

The New Mexico Department of Health has announced the reward for anyone who gets their second dose of Pfizer or Moderna or the one-dose Johnson & Johnson vaccine by Thursday.

State health officials are trying to reach a goal of having 60% of New Mexico residents age 16 and up fully vaccinated this week. Gov. Michelle Lujan Grisham has vowed to end the state’s color-coded risk system two weeks after the vaccination goal is reached, meaning businesses would be able to fully reopen.

The campaign included emails from various state agencies urging people to get their shots. The leader of the New Mexico Senate, Democrat Mimi Stewart of Albuquerque, sent out her own emails declaring: “It’s vaccine time!” Stewart’s emails also included suggestions for social media posts and email language that could be shared with friends and family.

Counties across New Mexico will also have the opportunity to get some extra funding if they drive up their vaccination numbers. A spokesperson for the governor’s office said counties that increase vaccination rates by 10% by midnight on Thursday will receive $1 million to be used on infrastructure and other projects. 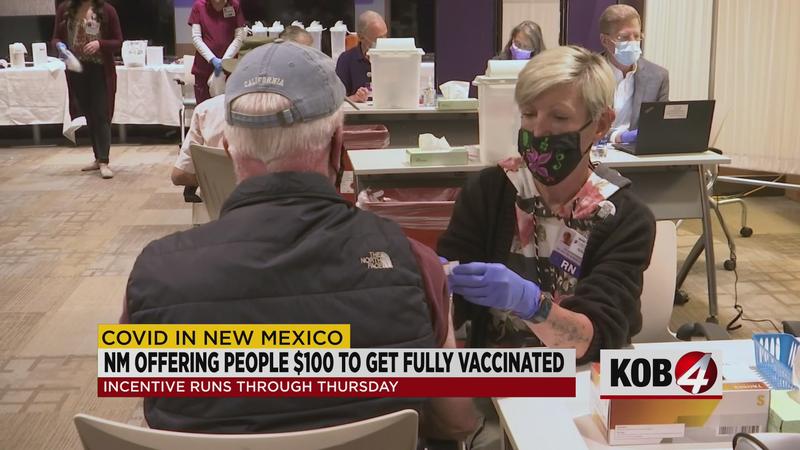 Republican lawmakers have long criticized the state’s reopening framework as outdated. The Democratic governor also has faced heat from business owners over her handling of the pandemic, and from parents for what many have described as a lost year of learning after schools were forced to go virtual and for their children’s inability to participate last year in extra curricular activities.

The latest incentive is on top of the state’s “Vax 2 the Max” program, where vaccinated residents can win prizes from a pool totaling $10 million. The rewards include a $5 million grand prize.

New Mexico will hold its first drawings Friday for four prizes of $250,000 each.

Vaccination rates have slowed over recent weeks. The latest data from the state puts vaccinations at about 58%.

The sweepstakes kept numbers from declining further but the boost was small. According to the state, the seven-day average of new vaccination registrations was 1,437 per day during the first week of the contest — just 85 more per day that the previous week.

The Health Department acknowledged Monday that there is more vaccine supply than demand.

Department spokesman David Morgan said in an email to The Associated Press that New Mexico is trying to adapt in several ways, including ordering only a minimal number of doses.

There is a large amount of inventory in freezers around the state, but Morgan did not say how many doses are in storage or how long it will be before they expire.

“We are working as hard as we can to get doses into arms all around the state,” he said, pointing to the cash incentives.