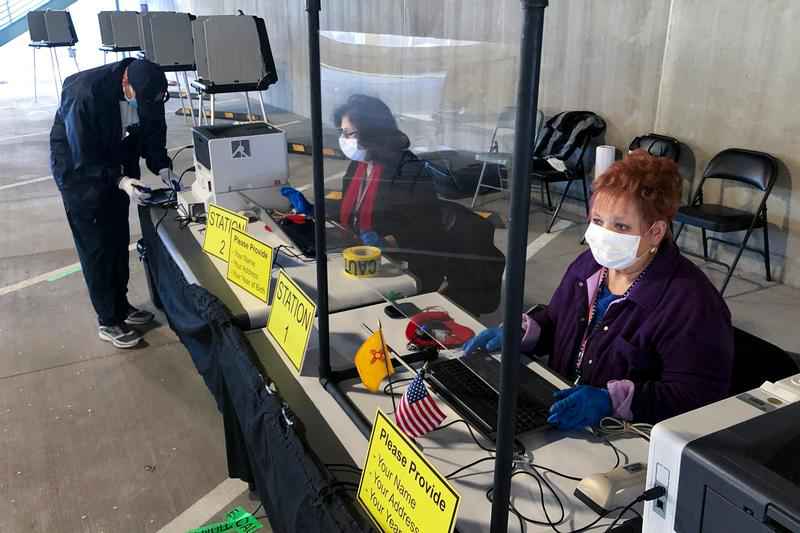 FILE - A voter, left, provides a signature to receive a ballot at a makeshift polling station inside a parking garage in Santa Fe, N.M., on May 5, 2020. New Mexico election regulators are resisting efforts by a conservative-backed foundation to post statewide voter registration information on a public website where it can be searched by names or addresses to view party affiliations and past participation in elections. (AP Photo/Morgan Lee, File)[AP Photo/Morgan Lee, File]

SANTA FE, N.M. (AP) — New Mexico election regulators are resisting efforts by a conservative-backed foundation to post statewide voter registration information on a public website where it can be searched by names or addresses to view whether people voted in past elections and sometimes their party affiliations. The website does not list details of how people voted regarding candidates or initiatives.

The Voter Reference Foundation, led by Republican former Senate candidate Doug Truax of Illinois, announced in December that it would add registered New Mexico voters to its website database VoteRef.com that has expanded since the 2020 election and now includes voter rolls from at least 20 states.

That move has prompted calls for a state investigation into possible misuse of election records and a pre-emptive lawsuit by Voter Reference Foundation to ensure its plans to publish the details about New Mexico voters.

The foundation has said its goal is to usher in a “new era of American election transparency.”

But New Mexico Secretary of State Maggie Toulouse Oliver said in an interview Monday that the foundation’s efforts violate state law in New Mexico that restricts the use of voter registration data to political campaigning or noncommercial government purposes.

“This is an overtly political purpose and not necessarily towards a particular campaign and in the government interest," Toulouse Oliver said. "Their purpose is to intimidate voters and make folks become concerned about the security of their information, to potentially cause voters to de-register and not participate in our process.”

Toulose Oliver in December referred the group’s effort for possible prosecution to the state attorney general. Her office traced voter registration data used by Voter Reference Foundation to a person who paid about $5,400 for access on the condition that the information would be used only for governmental, election, research and campaign purposes.

The foundation said its “election purposes are to increase voter participation and provide transparency regarding New Mexico elections, both of which strengthen election integrity.”

The foundation’s website highlights discrepancies in various states between the number of people listed as having voted on registration rolls and the number of ballots cast according to certified election results.

Election officials have described the methodology as flawed, noting that discrepancies likely surface for legitimate reasons when an election result is compared to state voting registration rolls that are continually updated as people change their addresses, enter and leave the state or die.

A preliminary hearing on the case was scheduled for Tuesday in federal court in Albuquerque.

Toulouse and Attorney General Hector Balderas have warned residents of Otero County in southern New Mexico to be wary of intrusive questions and potential intimidation by door-to-door canvassers linked to a review of the 2020 election that was authorized by the Republican-led county commission through a private company.

Toulouse Oliver said that authorities are probing whether the contractor improperly obtained bulk voter records through a third party that she did not identify.