ALBUQUERQUE, N.M. – There are more calls this holiday weekend for New Mexico to crack down on repeat DWI offenders.

Since Christmas Eve, there have been 14 DWI’s in the metro alone. And close to 1,800 DWI charges were given out this year in the Albuquerque metro alone. Many were first time offenses, but officers have seen familiar faces.

State police said 49-year-old Marlene Whitegoat was driving 103 mph per hour down I-40 in May, and she was arrested for her 5th DWI offense.

59-year-old Steven Casias has seven DWI arrests, The latest happening in March when he hit a concrete pillar.

And 42-year-old Jennifer Whitey with seven DWI arrests, with four happening within the past two years.

But when you look at the outcome of Whitey’s case, one of those charges was dismissed because the officer failed to appear in court.

Valdez said it’s cases like this, where there seems to be no consequences, that she believes sends a message.

"I think it overall shows that some people really don’t find any fear in consequences if there are no consequences to driving under the influence."

But how often is this happening?

"They are isolated but they are not isolated enough, let me put it that way it’s still a troubling endeavor,” said Ahmad Assed criminal defense attorney.

Assed said this specific issue, of people falling through the cracks, has been going on for a while.

"We’ve been talking about this topic for decades and quite frankly we still find ourselves almost in the same position,” said Assed.

When you look into the sentencing for convictions, your first DWI could land you a minimum of two days behind bars. An eighth would be 10 years, but Assed says, that doesn’t mean people are spending all of that time in jail. 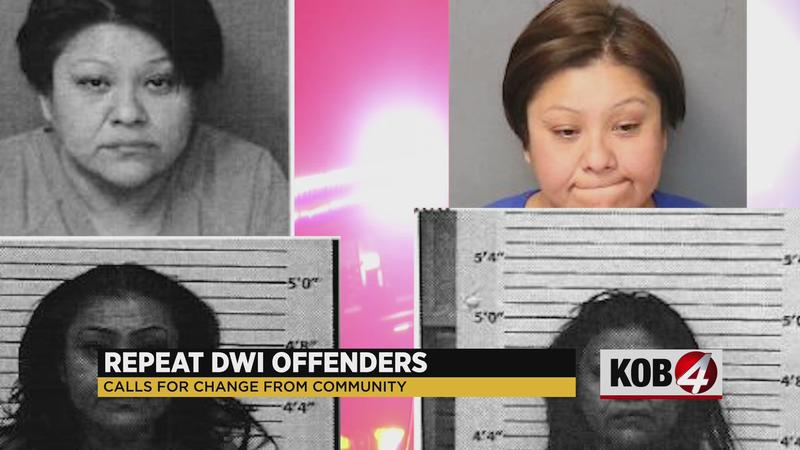 "The mandatory sentences can be completed through an ankle bracelet process or home arrest rather than actually serving out their time at Bernalillo County at MDC,” Assed said.

Which has led to calls for change from those who lost their loved ones.

"It has an effect on anybody. Growing up without a dad is hard," said Jackie Copeline.

Copeline’s father was killed by a repeat drunk driver offender when she was seven. She recently started a petition asking for stricter DWI enforcement and treatment.

Those that KOB 4 spoke with said treatment and more education for those with multiple offenses need to be key elements moving forward.