ALBUQUERQUE, N.M. – Victims of gun violence aren’t just numbers or stats, they are real people with real lives that were cut too short. They have families who love them and grieve them.

KOB 4’s Chris Ramirez explains a project that helps drive home the very fact – that the people killed in New Mexico deserve to be remembered and celebrated.

Throughout the weekend – at UNM’s student union building – Angel Alire brought together family members who have experienced unimaginable loss.

“On a sleepless night I was scrolling and I happened to enter the words ‘gun violence’ into the web browser, and I was actually looking for different laws that had or hadn’t passed,” said Alire.

Alire’s son, 22-year-old Devon Trey Hayborne, was killed in April – allegedly by a man who was supposed to be on house arrest wearing a GPS ankle monitor.

Alire discovered the Gun Violence Memorial Project in Washington, D.C. It’s a memorial made up of glass houses, with 700 clear bricks in each house. The bricks represent the average number of people lost to gun violence every week. Emily Ebersol is part of the project.

Ebersol was in Albuquerque to meet with Alire and so many other mothers. Each mother brought in small objects belonging to their sons – who all were killed by gun violence – that will be installed at the Washington D.C. memorial.

“For me, I’m bringing a toy car, a Suburu BRZ, my son dove a Suburu BRZ, a mini basketball because basketball was his life and an airplane because he was almost done with his pilot’s license,” said Alire.

“I am my son’s voice and I just think I’ll never forget about him, and it’s an honor to do this for him and it makes families feel good,” said Otero.

Otero wants her son’s legacy to be remembered with everything he loved.

“He collected Jordans, he loved shoes. I got a pair of Jordans for him because that was his passion and love. He always considered himself a king, so I got cards to reflect that. He was a gamer his whole life. I remember buying him his very first Xbox. That was his passion, so I brought his Xbox controller,” said Otero.

For Rogelle and Rebecca Price, they are still searching for answers in Trevonte Robbins’ murder. He was their cousin.

“Right now, we are looking for justice for him, looking for his killers to be arrested and I feel like there is so much gun violence going on right now, that I’m glad it’s being brought to light and people can express how wrong it is and what families go through when they are affected by gun violence,” said Rogelle.

Once Trevonte’s brick is installed, the family plans on going to Washington, D.C. to see it.

“He was a big sports fanatic, so his YAFL jersey, it says Robbins on the back from Highland. His Oklahoma Thunder was his favorite team and his sister graduated from high school this May, so we have this proud brother of a graduate for 2021,” said Rogelle.

Dozens of families from New Mexico donated artifacts to the Gun Violence Memorial Project this weekend. The clear bricks honoring lost New Mexicans should be on display by late January or early February. 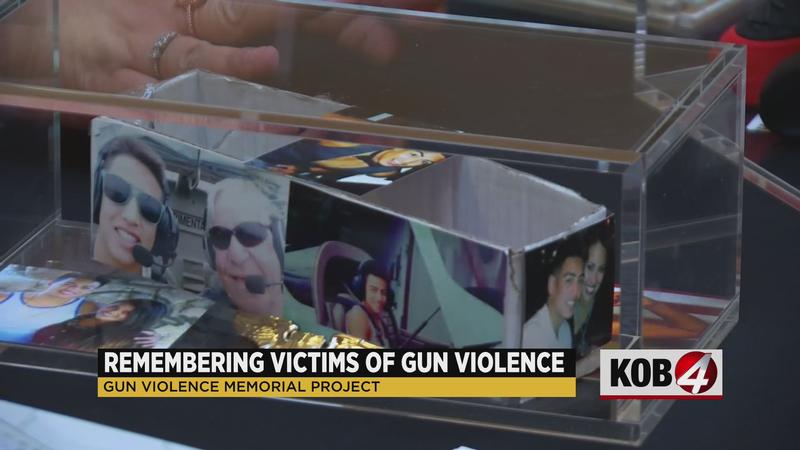