ALBUQUERQUE, N.M. – The New Mexico Film Office made changes to its website so it is easier for workers to access information on safety procedures, protocols, and training opportunities available to make film sets more safe.

Director of the film program at CNM, Tim Forrest told KOB 4, the fatal shooting that happened on the set of ‘Rust’ last month, was not caused by a lack of rules but a lack of enforcement.

"Unfortunately, when a tragedy happens, people tend to reinforce whatever sort of safety protocols they have, which is a good thing," said Forrest.

Forrest added that the incident is a tragic demonstration of what happens when protocols are overlooked. He said that is why it is crucial for film instructors to teach the industry’s next generation the importance of set safety.

"Many of our instructors will start off, saying ‘the three most important things in film production are safety, safety, safety,’” he said. "When I walk onto a set, I see nothing but danger, and I think that is the appropriate way to approach training students, to make them observant enough, so they can see if something is a potential risk."

CNM is also teaching students to always report unsafe conditions or behavior on film sets. Recent updates to the NM Film Office website may help with that. The state recently added a ‘Set Safety’ tab to its home page. It includes multiple safety hotlines, and contact information for Osha, as well as local union and non-union representatives. The office also posted dozens of safety bulletins in English and Spanish, detailing proper safety procedures.

Forrest said, while putting these resources in one place is helpful, the state could take enforcement a step further.

"Would it be the worst idea in the world to have a safety czar at the state level, who would visit sets and be able to look at the programs and standardize what sort of procedures are going on," he said.

He argued the change would add protections to New Mexico’s film industry for our current and future workers.

A spokesperson for the New Mexico Film Office confirmed the changes they made to the website were in response to the ‘Rust’ incident, and sent KOB 4 the following statement:

“We’ve had safety resources on our website for a while, and added more as the COVID-19 pandemic escalated, that could be previously found under ‘For Filmmakers / Resources.’ Recently, we have added more resources and placed them in a more visible location after the “Rust” incident occurred. Our list is not exhaustive. We will continue to add more information on an on-going basis.

Safety is a key priority and the NMFO providing resources to the film industry of New Mexico via our website, and now in our registration process, helps increase awareness, reporting and transparency.

In addition to incorporating safety resources in our registration process, we also continue to collaborate with industry stakeholders and the state. Further, we are hosting an event soon, details TBA, for the community to share concerns and ideas about set safety. For people who are unable attend the event, we will provide alternative ways to view the event and submit feedback.

The NMFO is always seeking more ways to support the safety of the New Mexico film workforce.” 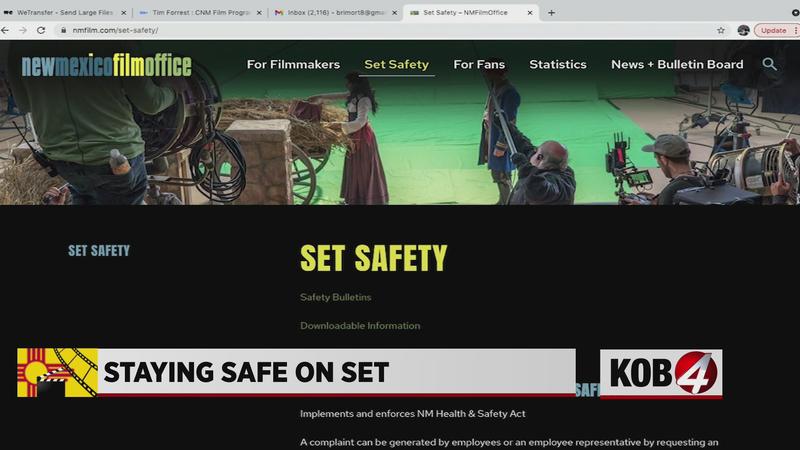