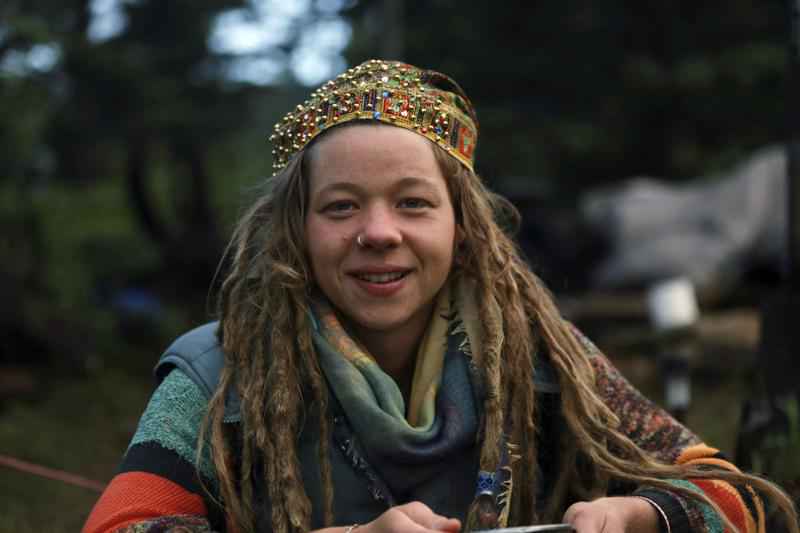 CARSON NATIONAL FOREST, N.M. (AP) — Across a mile-long stretch of forest in a remote part of northern New Mexico, the party is in full swing.

Tents dotted mountain meadows flanked by dense stands of trees. Makeshift kitchens were erected to feed the hundreds of people gathering for what would be a weekend-long celebration attended by grandmothers, families with children and others in search of peace, camaraderie and perhaps to smoke a little weed.

This is the Rainbow Family.

The Carson National Forest, just beyond the tourist enclave of Taos, was chosen as the spot for this year’s national gathering. But people also were congregating for the July 4 celebration in Pennsylvania and elsewhere.

The so-called Rainbow Gathering — which draws an array of characters who range from office workers looking to get away from the daily grind to nature lovers and those who have mastered van life — was set to culminate Sunday in a silent hand-holding circle punctuated by a loud “ohm.”

Normally, the gathering, which was first held in 1972 in Colorado, draws around 10,000 people to a single forest. This year, the participants are less numerous and heading to regional meet-ups because of COVID-19 concerns. Last July 4, regulars joined each other online to “ohm from home.”

For Gina “Mama G” Prince, the gathering is about peace. For others, they are united by anti-authoritarianism rooted in the religious and congregational freedoms guaranteed by the First Amendment.

With pandemic restrictions easing, Prince said she was happy to be at her first Rainbow Gathering since 2019, when the event was held in Wisconsin.

“I’ve been counting the moments to come out here,” said the 67-year-old Florida resident, who picked up a fellow Rainbow participant in Tennessee on the way. Wary of the virus and bogged down with underlying health concerns, her partner stayed in Florida.

In one camp, cooks prepared sweet strawberry pastries and served them to whoever was around the campfire. Money is frowned upon at the gathering, and participants bring food donations to share. Volunteers run every aspect of the camp, from piping water out of streams to digging latrines, to cleaning up the camp and packing up trash.

Drum circles are a nightly event. So are fireside discussions about everything from dinner plans to the nature of existence and metaphysics.

Officials with the Carson National Forest held an online forum last month for residents to ask questions about enforcing drug laws, respecting sacred tribal lands in the forest, and the plan for taking out the trash.

Forest Service officials say gatherings in recent years left surprisingly little impact on water, erosion and other areas of concern to forest officials. With a fraction of the normal participants this year, the concerns are even fewer.

Still, rangers had seized an undisclosed number of guns and cited people for things as minor as a cracked windshield. Other charges involved marijuana and methamphetamine possession.

For decades, the Rainbows have complained that law enforcement assigned to patrol them have used any excuse to pull them over and search them.

Prince said she and another woman were searched on their way into the gathering, and her friend’s marijuana stash was seized. New Mexico this week legalized the recreational use of marijuana, but it’s still illegal on federal land.

“They pulled people over and took all their weed,” Prince said. “Pulled over a couple of grandmas.”

The gathering normally boasts a giant bakery, hauled up mountainsides by hand and constructed out of metal barrels. Volunteers crank out as many as 8,000 dinner rolls per night from their perch in the woods.

“It takes about 35 of us to make the magic happen,” said long-time Rainbow member Darrell Schauermann of Taos.

There are perils that can come with camping in a remote spot at high altitude.

On Friday, an elderly man with cancer fell gravely ill. It took an SUV, a Forest Service pickup truck and an ambulance to get him to a spot miles down the mountain where he could be loaded into a helicopter and taken to a hospital. Along the way, he was tended to by John Hartberg, a 33-year-old physician from New Orleans who was attending the event.

Shirtless and wearing a hat and a turquoise stethoscope, he declined to comment on the patient’s condition, citing medical privacy rules.

Usla Gregory, 45, of Taos said the patient was his best friend. “We share the same astrological signs,” he said, before breaking into tears.

After the July 4th celebration, Rainbows who choose to participate in a selection committee will pick a spot for next year’s gathering. Insiders suggest that Colorado is the leading contender.