ALBUQUERQUE, N.M. — Hospital workers are so critical right now. It’s a problem that is impacting the entire country.

“It’s hard to say the challenges we have are unique to New Mexico,” said Troy Clark, president of the New Mexico Hospital Association. “There are parts of the challenges that are unique, but the entire country has been in a nursing shortage for many, many years.”

According to a new survey by the New Mexico Hospital Association, travel nurses make up 12% of nursing hospital staff, with 17% of nursing positions still vacant.

“We have nurses that are exhausted and tired having worked so long without a break and they have decided of either leaving the profession or early retirement. Those two are probably the biggest drivers,” said Clark.

So the nationwide demand for travel nurses is driving those prices up. Clark said on average, nurses make around $35 to $40 an hour.

Normally, pre-pandemic, hospitals would pay an agency $70 to $80 an hour for a travel nurse. Now that price is hovering around $185 to $200 an hour, according to the New Mexico Hospital Association.

“Hospitals have done and are doing all they can to retain the providers they have,” said Pamela Blackwell, Director of Policy and Communications at the NMHA. “You know, its bonuses, its scholarships for school, child care, all of the above that makes the most sense for their hospitals.”

Blackwell said while hospitals work to retain staff they are also preparing for any new surges, especially as we head into the winter season.

“We have close to 450 beds, beyond what their licensure bed rate is, that are available. So sometimes when we talk about beds, we’re forgetting that a bed really is a person and patient that needs that. So there are close to 450 in this time of crisis beds available but they’re not staffed to staff those beds,” said Blackwell.

There are a few solutions in the works, both in the short term and long term. Clark said they are looking to supplement vacancies with travel nurses.

“Trying to work with the agencies and the government to not financially stress our hospitals more by having a reasonable cap or limit on what the prices are to get these individuals into our state,” said Clark.

They’ve been working with their members to develop short, medium and long-term solutions to the nursing shortage. But Clark is hopeful the long-term goal will be the game-changer.

“Since we’ve been in this for a long time for nurses, working with our governor, working with our legislators to try and create incentive to create the desire for more New Mexicans to become trained to be health care providers whether that’s nurses or clinical workers who already live in the state,” said Clark.

“It probably is a two to three year process for the first ones to come through but we believe that’s a sustainable model,” said Clark. “It’s not just a one year pop, that you wait two to three years to get one group in, but actually increase the number of slots so you have a consistent pipeline.”

Right now, the New Mexico Hospital Association said they are working with hospitals on best practices in an effort to retain current staff – that’s bonuses, scholarships for school, child care. 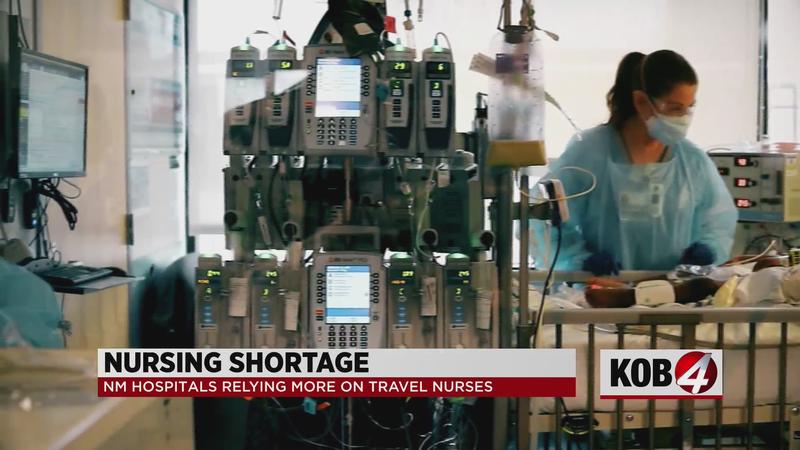 But according to a survey they conducted, 30% of the current nursing workforce is unsustainable.