The Senate approved by voice vote with no indication of opposition to endorse a roughly $8.48 billion general fund spending plan for the fiscal year starting on July 1 — a 14% increase over current-year spending.

The bill now moves to the desk of Democratic Gov. Michelle Lujan Grisham, who supports major provisions and can veto any part of the spending plan.

The budget builds on a windfall in state government income from surging oil production and federal pandemic aid.

Salary increases of at least 7% are slated for school district and state government staff across the state, with a minimum hourly wage of $15 for public employees and higher base salaries for teachers. 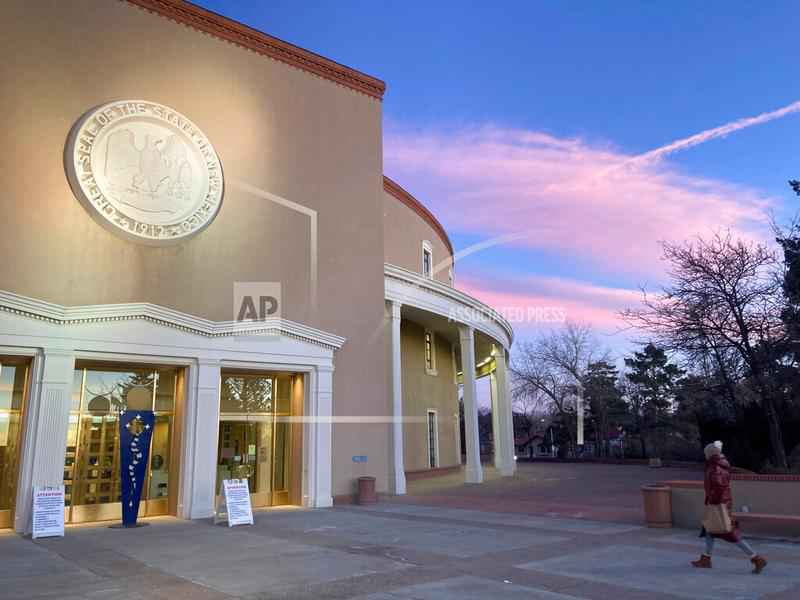 Light fades outside the New Mexico State Capitol on Saturday, Feb. 12, 2022, in Santa Fe, N.M., as the Legislature debates record-setting proposals for spending increases on everything from state police salaries to shelter for the homeless and election administration. (AP Photo/Morgan Lee)

Annual spending on K-12 public education would increase by $425 million to $3.87 billion, a 12% boost. Annual Medicaid spending would increase by roughly $240 million to $1.3 billion as the federal government winds down pandemic-related subsidies to the program that gives free health care to the impoverished.

In a state with high rates of poverty, the proposal extends free college tuition to most New Mexico residents pursuing two- and four-year degrees, and it fully funds home-based care for thousands of people who have had severe disabilities since childhood.

Amid a record-setting spate of homicides in Albuquerque, the budget would underwrite new intervention programs aimed at curbing gun violence and boost salaries for state police by nearly 16% — with even higher increases for judges.

Legislators want to extend pregnancy-related Medicaid coverage for a year after births, up from two months, by spending $14 million. Most births in New Mexico are covered by Medicaid.

The budget bill funds an initiative from the governor to establish a training academy for the film industry run by a consortium of existing state colleges and universities. It also provides $650,000 to found a climate change bureau as the state expands the regulation of greenhouse gas emissions.

Lawmakers were still racing against the clock to approve a $385 million package of tax cuts, credits and rebates that would narrow the scope of taxes on Social Security income and provide a per-child tax credit of up to $175 to parents. The Legislature adjourns by law at noon Thursday.

The Legislature also inched toward final approval of a package of crime-fighting initiatives that would expand surveillance of criminal defendants as they await trial, with 24-hour monitoring of ankle-bracelet tracking devices.

Legislators balked at proposals to ban pretrial release for people accused of some serious crimes. They have focused on efforts to expand police training and oversight, with funding for alternatives to traditional prosecution and incarceration. Some enhanced criminal penalties are possible.

Time was running out on efforts to shore up election oversight, expand voting access and protect election workers from harassment, after fragmented proposals were combined into one bill.

Proposals endorsed by Democratic Gov. Michelle Lujan Grisham and Secretary of State Maggie Toulouse Oliver would expand access to mail-in ballots and voter registration opportunities, in a counterpoint to new restrictions on voting access in at least 19 Republican-led states.

On teacher pay, legislators approved a measure to allow Indigenous language teachers to be paid at the same rate as their peers, even if they don’t have an undergraduate degree. Bills sent to the governor earlier this week would increase teacher pay between 7% and 22%. For Native American language teachers paid as teaching assistants in many districts, their salaries could triple.

Lujan Grisham is expected to sign all of the teacher pay measures.

In consumer protection efforts, legislators sent a bill to governor’s desk Wednesday that caps annual interest rates on storefront loans at 36%, down from 175%.

In a concession to profitability, a fee of 5% can be charged on loans of up to $500, and the maximum size of an installment loan is doubled to $10,000.

In a statement, Lujan Grisham signaled her support for the legislation.