SANTA FE, N.M. – In a move she touted as being the first of its kind in the U.S., New Mexico Gov. Michelle Lujan Grisham announced Wednesday that she’s asked members of the state’s National Guard units to get certified to work as substitute teachers and child care workers.

The governor’s staff said that, since kids returned to schools and daycare at the beginning of the year, some 60 districts and charter schools have returned to remote learning – and 75 child care facilities have either partially or completely closed due to the spread of the omicron COVID variant.

“Our schools are a critical source of stability for our kids,” Gov. Lujan Grisham said in a press release. “We know they learn better in the classroom and thrive among their peers. Our kids, our teachers and our parents deserve as much stability as we can provide during this time of uncertainty.”

The governor also said Wednesday that she has asked qualified state workers to volunteer for the same duty. Those employees will be allowed to use paid administrative leave for substituting, which will save money for school districts and child care facilities. National Guard members will be paid for active duty. 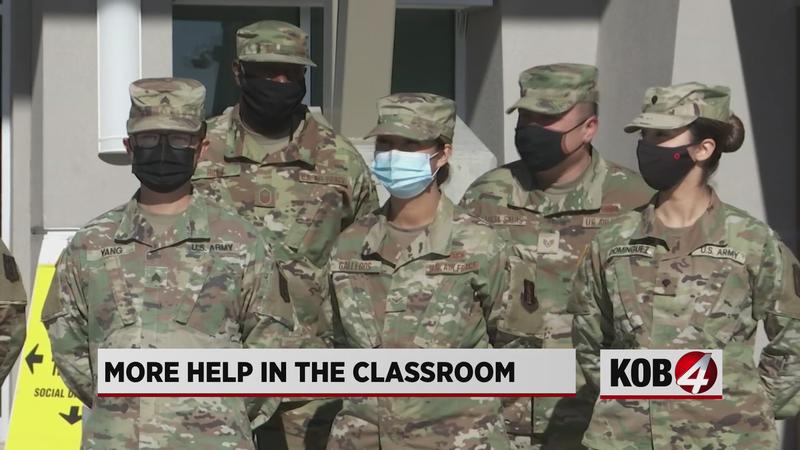 Some 16,000 state employees will receive the request Wednesday afternoon. In New Mexico, there are roughly 4,000 members of the Army and Air National Guard.

For both school and child care duties, online applications and training are available. If everything works as planned – which the governor’s office says has been the case in test runs – the licensing process should take only a few days. The process will include at least one background check – and likely more depending on the school district – and volunteers could be in classrooms as early as next week, Lujan Grisham’s administration said.

“This is state government at its best,” Public Education Secretary Kurt Steinhaus said, “and we are ready to step up to support our teachers, who have been on the front lines of the pandemic for nearly two years now, by increasing the state’s pool of substitute teachers.”

Brig. Gen. Miguel Aguilar said the National Guard anticipates 50 members will volunteer immediately, with that number potentially doubling in the next several days. The State Personnel Office did not have an estimate of how many state employees would volunteer.

National Guard members will not be armed. Schools and child care centers will also decide whether or not they’ll be in uniform. Other options include a National Guard polo shirt or civilian clothes.

Even if early volunteer numbers are robust, the Public Education Department said Wednesday that a survey of school needs this week showed a shortage of 800 substitute teachers statewide for full-and half-day needs, as well as single-class coverage requests.