SANTA FE, N.M. – The New Mexico Supreme Court ruled against Gov. Michelle Lujan Grisham Wednesday, and handed a win to the state lawmakers who sued her, claiming she overstepped her authority.

The high court agreed state legislators should be in charge of distributing more than a billion dollars in COVID relief funding. According to the petition, $1.08 billion remains in the state treasury. So far, the governor appropriated more than $600 million.

Petitioners said previously that if the high court ruled in their favor, they would not ask for those funds to be returned to the account. Lawmakers only requested control over what’s left. Their request was granted Wednesday afternoon.

"The court rules as follows — one, the court grants standing to the petitioners on the basis of great public importance,” said Chief Justice Michael E. Vigil. “Two, the court determines that a writ is appropriate in this case, and the court will order that writ of prohibition and mandamus prohibiting the governor and the state treasurer and all other state officials subject to their report, from transferring, encumbering, committing, expending, or appropriating any additional funds other the state ARPA account in the state treasury, absent legislative appropriation."

Senators Jacob Candelaria and Gregory Baca filed the lawsuit months ago, after Lujan Grisham vetoed their plan to deposit American Rescue Plan funds into a contingency fund. Since then, several other state lawmakers, both Republican and Democrat, have backed the lawsuit, quoting the constitution which states, "money shall be paid out of the treasury only upon appropriations made by the legislature." 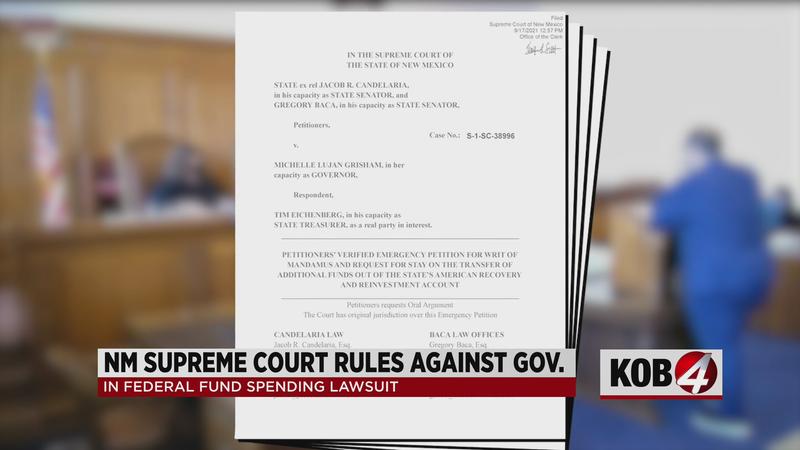 Prior to the high court ruling, the governor’s office argued that the legislature may control state funds, but not federal funds.

"I was disappointed in the Supreme Court decision, but look, it’s not going to let it rain on my parade, and I don’t think it’s going to rain on the legislators’ parades, except that I wouldn’t go on vacation,” the governor said, following a news conference Wednesday afternoon. “And I’m going to grasp that maybe your Thanksgiving, Christmas, over, because it means we need to do some extra work together.” She went on to say, “I’m still celebrating that we have sufficient ARPA rescue plan resources and that we have incredible amounts of money coming in from the infrastructure and jobs act."

“In one of the most significant rulings in decades, the New Mexico Supreme Court today preserved the appropriating authority of the legislature and affirmed the separation and balance of powers enshrined in our Constitution. As legislators, we are the representative body of government and we are accountable to our constituents for the spending of their tax dollars. The Governor’s attempts to assume unilateral control of our state by bucking the authority of her office and the state constitution are an egregious power grab, and we are thankful that the high court has ruled in favor of the people.”

Lujan Grisham said conversations with lawmakers about the remaining federal funding need to begin as soon as possible. The money will remain in the treasury until they can make a decision on how to spend it together. That could either happen before December’s special session or after.

The New Mexico Supreme Court says it will soon release an opinion to explain its reasoning for Wednesday’s decision.