BERNALILLO, N.M. – Commuters who pass through Bernallilo will hopefully no longer have to deal with construction and long traffic jams. Crews have been working on a Continuous Flow Interchange on U.S. 550 for the past two years. As of Wednesday, officials say that work is finally coming to an end.

NMDOT said the interchange is the first of its kind in New Mexico. A KOB 4 crew visited the intersection and noticed there is still traffic and a few slow-downs, but report that conditions are not nearly as bad as they used to be.

State officials explained how the new roads work: A green light will allow southbound traffic on Tamaya Blvd. or northbound traffic on NM 528 to make a left-hand turn and safely cross oncoming traffic. That is while the oncoming cars are stopped at red lights. East and westbound drivers will then navigate into new lanes on the far left-hand side of U.S. 550. Traffic heading north on NM 528 will be able to turn right and head east on U.S. 550 without having to stop at the intersection.

Our KOB 4 crew said they did notice some confused drivers, but most commuters seemed to adjust to the changes with ease.

NMDOT said 50,000 drivers pass through the Bernalillo intersection every day. That number is only expected to increase. 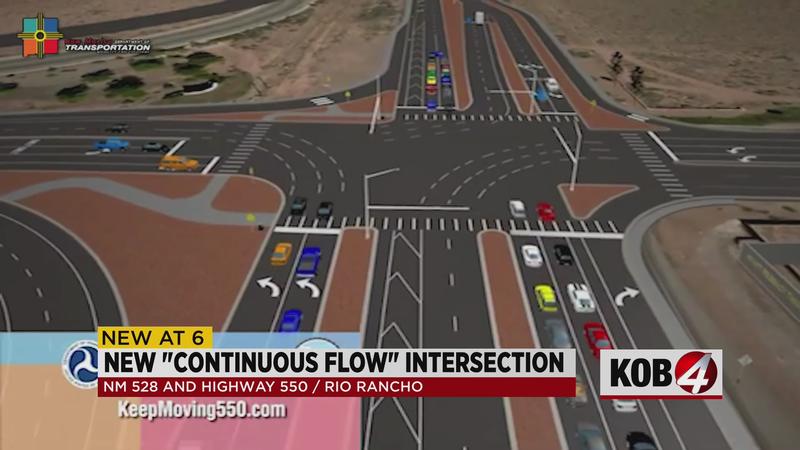 “It is projected to be 70,000 by 2035, and we’re hoping that this will be able to accommodate all of those drivers that come to that area, because it is a mainline for people trying to get to I-25, as well as the other side of Bernalillo or coming out from Rio Rancho,” said Kimbery Gallegos, the District 3 Public Information Officer for NMDOT. “So it really is a highly used corridor, and we’re hoping that these improvements will make a huge difference in the commute time.”

Gallegos said even though the roadway is open, the work there is not quite complete. Construction crews plan to hit substantial completion by Thanksgiving. That means they might have to return in the spring to put down a top layer of pavement, when the weather warms up. Gallegos said all that work will happen overnight, so drivers do not have to deal with any more closures and disruptions in the area.

Click here for more information on how the new intersection works, including simulation videos.