ALBUQUERQUE, N.M. – For decades — New Mexico has been known for its connection to UFO’s and now, one of the state’s U.S. Senators wants to help get some answers

He does but it turns out there’s already a lot of boots on the ground. Civilians and trained scientists are using their skills to answer one of the world’s burning questions — are we alone in the universe?

A new proposal aimed at creating a federal office to investigate and report sightings of unidentifiable aerial phenomenon.

“It acknowledges it, it admits that it is, it really is an entity out there that indeed, in need of more research, and more attention and to be taken seriously,” said Maria Tellier with MUFON New Mexico Chapter.

In a statement– she said the American people deserve transparency and wants to end the cycle of sweeping sightings under the rug.

The bill still has to make it through congress but the search for answers is already well underway.

Tellier is the assistant director for the New Mexico chapter of MUFON– the Mutual UFO Network.

"We’re a civilian organization that keeps the identity of our witnesses confidential, we investigate sightings of UFOs, or anomalies and whatnot, throughout the country, and also, you know, the world. And we report back what we find,” Tellier said.

She joined the group back in 2012 after her own experience in southern New Mexico between Las Cruces and Alamogordo.

"One time I saw something to the west, hovering, and I thought oh my God, you know, I thought I saw a day saucer day disc as we refer to that. And I took pictures of it. And it was, Oh my God, what is this.”

She went looking for answers and the group gave her one.

“It was a blimp! It was a, it was a border patrol blimp that’s what MUFON investigated and that’s what they found it to be. It was identifiable.”

A lot of cases end up the same way. MUFON has investigated nearly 80 sightings in New Mexico this year alone and just about half were identifiable.

"The starlink satellites, for instance, is are reported quite often as anomalies in the sky, depending on what angle you’re looking at, it really can be confusing,” said Tellier.

But sometimes — there just aren’t answers.

"Two years back, I had some sightings over around Three Rivers Park. And it was a glowing light that I had four cases within the month of June. I couldn’t identify what they were. And they all saw something similar at a similar time. But not this thought the same day,” said Tellier. "I thought maybe I was on to something there for a little while. But the the Lincoln forests in the Sacramento mountains are around that sacred area. And there’s a lot of things in and out of there that we just don’t know what they are. And I still keep my eye on that area.”

But figuring out what people saw is just the first step. The next big question — where did it come from?

"I’d be really truly surprised if we were the only, you know, sort of form of life in this galaxy, or even in this part of the galaxy,” said Tony Beasley director of the National Radio Astronomy Observatory.

Researchers at NRAO near Socorro are trying to find answers — by looking in the stars. They partnered with the SETI Institute to scan the cosmos for powerful radio waves.

“The reason why radio has been a pretty popular place to look for these signals, is that radio waves pass through clouds of gas, and dust, and so on. So you can pick up radio signals from every part of our galaxy,” said Beasley.

Crews finished assembling the tech just about a month ago — so no major discoveries just yet — but researchers say don’t get your hopes up.

“I seem to remember reading somewhere that the estimate was like 10,000 years,” said Beasley.

And even if they do find a powerful signal, the chances whatever sent it are still around are pretty low.

"We’ve only been transmitting radio signals for 100 years, 120 years, or something like that. So the problem with radio is you’re looking a lot further, but it’s only a narrow window in time, at least it was for us. So there’s only been a narrow window in time,” Beasley said. "If you took our Earth, and you took the radio signals that are coming out of it, and you moved it to the distance of a lot of the stars you see in the night sky, we would not be able to detect it.”

But he says the search for intelligent life in the cosmos is just getting started.

"It turns out the the amount of space that we’ve searched is like a glass of water in the Pacific Ocean. It’s tiny. So okay, maybe your chances aren’t so fantastic. But if you don’t look, you won’t detect anything.”

A few small steps to answer a big question.

“I’ve been looking all my life. Honest to God. I wish, I wish one would land in my backyard,” Tellier said.

Officials from the NRAO say they are working to build even more antennas and soon, they say they’ll be able to look at the everything in the night sky all at once, not just a small portion. 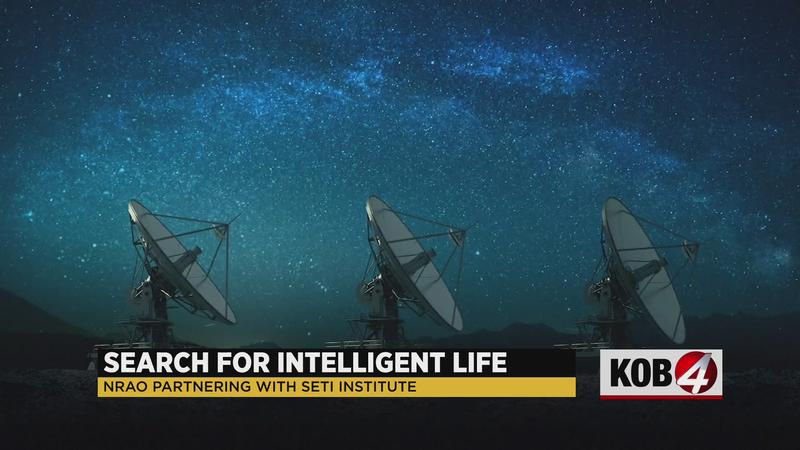