ALBUQUERQUE, N.M. – Hundreds gathered in L.A. Sunday to honor the life of Halyna Hutchins – the cinematographer accidentally shot and killed with a prop gun last week in Santa Fe.

Actor Alec Baldwin was the one who shot that gun while he was rehearsing a scene for the movie "Rust." Now, KOB 4 has new details about the moments before Baldwin was given that gun.

Joel Souza, the film director who was hit in the accidental shooting, gave investigators details as he was recovering at Christus St. Vincent Medical Center on Friday.

The shooting happened inside a set church at Bonanza Creek Ranch Thursday afternoon. Souza said the scene involved Baldwin sitting on a church pew and the pulling the prop gun across his body and pointing it directly at the camera.

That’s when the gun went off and both Hutchins and Souza were hit. He said at that point Hutchins grabbed her stomach and said she couldn’t feel her legs.

Souza also shared what he knew about the handling of that prop gun right before the shooting. He said the crew members were prepping for the scene before lunch, took a break to eat, and returned. Souza couldn’t confirm the prop guns were checked after that lunch break. He said three people handled those weapons – two of which are coming under more scrutiny.

Santa Fe County deputies said armorer Hannah Gutierrez, also known as Hannah Reed, prepared the gun in question. Just weeks ago, in a podcast interview, Reed said she was reluctant to be the armorer on a Nicholas Cage movie that just wrapped.

"It was also my first time being head armorer as well,” she said. "You know, I was really nervous about it at first, and I almost didn’t take the job because I wasn’t sure if I was ready, but doing it, like, it went really smoothly."

She’s 24 years old and the daughter of a well-known Hollywood armorer.

Meanwhile, there are also new allegations against “Rust" assistant director Dave Halls. The search warrant shows the day of the accidental shooting, Halls took one of three guns Reed prepared and yelled "cold gun." That’s an industry term meaning a prop does not have live ammunition, but it did have live rounds, according to the search warrant. The warrant also showed that both Halls and Baldwin, who fired the weapon, told deputies they didn’t know it was loaded.

Now a new NBC News report includes allegations that Halls has a history of using unsafe practices on sets. A prop maker who worked with him in 2019 had her own thoughts about her experience on the set.

Halls has not responded to requests for comment from NBC News.

Meanwhile, a 911 call from the “Rust” shooting reveals there was perhaps more frustration with Halls. A crew member criticized him to the dispatcher.

"And this (expletive) AD that yelled at me at lunch, asking about revisions, this mother (expletive.) (inaudible) He’s supposed to check the guns. He’s responsible for what happens on the set."

Over the last four days, KOB 4 has heard from multiple people with experience firing guns on New Mexico movie sets who said live rounds should be nowhere near any prop guns and multiple people should be checking each gun.

KOB 4 does know deputies seized phones and iPads along with all prop guns and weapons from the set. They’re planning on analyzing all of those items for answers.

Meanwhile, the Santa Fe County District Attorney said they’re in the early stages of this investigation – and while no charges have been filed yet, they haven’t ruled them out.

An Internet petition has called on Alec Baldwin to advocate banning real guns on film and television sets stating, in part, computer technology justifies getting rid of the risk of having real guns. 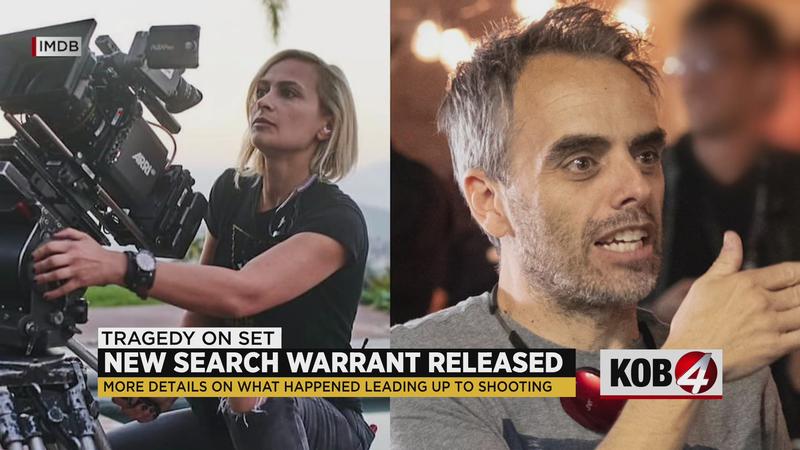