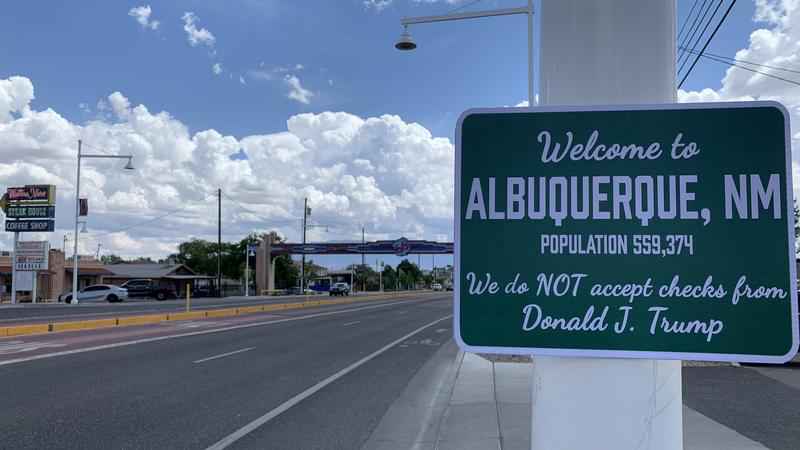 ALBUQUERQUE, N.M. — Albuquerque has a cardboard new sign, which was sent as a joke courtesy of Jordan Klepper from The Daily Show.

The sign on Central states, "We do NOT accept checks from Donald J. Trump." It’s referencing the Trump campaign’s $200,000 owed to the city following the former president’s rally in Rio Rancho in 2019.

The security cost include blocking off parts of downtown, paying police officers overtime and covering the paid time off expenses of city workers who had to stay home.

The City of Albuquerque referred the bill to a collection agency.

"We actually treated it like any other debt, and so it goes through a process where you send a bunch of letters out," Keller said. "We got no response from those letters. And then automatically, it does go to an agency that helps try and collect debts, and so that’s those annoying phone calls you get that say, you know, you owe money to so-and-so, and now Trump is getting those."

Most of America found out about the debt when Keller appeared on The Daily Show to talk about the bill.

Klepper showed the mayor the sign during the segment and offered to send it over.

On social media posts sharing the sign, Keller said, "Just to clarify, we would accept one check from him for the amount of roughly $200,000 for services rendered."

KOB 4 had previously reached out to the Trump campaign to find out if it plans on repaying the City of Albuquerque.

The campaign replied with an email that stated the campaign is "reviewing your request."

Just to clarify, we would accept one check from him for the amount of roughly $200,000 for services rendered.

Come on DT, don’t make us throw a pizza on your roof. https://t.co/tfHRSfguSg