ALBUQUERQUE, N.M. — A South Valley man who goes all out for his wife on Valentine’s Day is spreading some of that love to the community this year.

"They said, I love you, and I love the South Valley,” said Lonnie Anderson, an artist.

With the help of the city of Albuquerque and other artists, Anderson was able to unveil a new art exhibit inside the South Broadway Cultural Center.

"And I think it’s important to just even put the word out there: love,” Anderson said.

The exhibit is a compilation of two decades’ worth of love gestures to his wife, Anne. 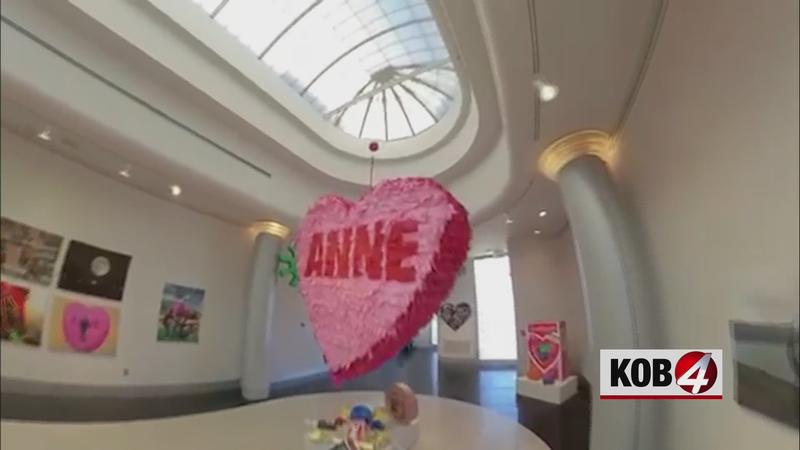 "Because I had all these pieces and I really wanted to put them together,” he said.

The process wasn’t easy for Anderson.

"COVID came and, you know, then again I asked a bunch of galleries, like, ‘Hey I have these valentines. Like, what do you think about doing something?’ And they’re like, no. That’s not art,” he said.

With the help of Anderson’s daughter, they received contributions from world-famous street artists, along with what Anderson said is the last poem Rudolfo Anaya ever wrote, which was dedicated to him and Anne.

"As we all know he passed away in June,” Anderson said.

They even made a virtual tour because Anderson said this year’s gesture of love is not only just for Anne.

The exhibit is for everyone that helped Anderson pull of a Valentine’s Day surprise, and beyond.

"That it will remind people in the South Valley and around the world that I made this for them and I love them,” he said. “They’re loved. I think that’s the most important part of this show."

"If every single person out there who saw this tonight made something about love, put it in the universe, put in the world, gave it to their neighbors, put it in their communities. I mean, how beautiful would that be?" he added.

The exhibit is free to the public. For more information, click here.