ALBUQUERQUE, N.M. – Newly-sworn-in New Mexico Rep. Kay Bounkeua is representing with an eye on providing equal representation and restoring trust in a district fraught with controversy this year.

Rep. Bounkeua was named to the District 19 Bernalillo County seat of former Rep. Cheryl Williams Stapleton after Stapleton resigned amid allegations of stealing public money. Bounkeua was sworn in Aug. 24 as the state’s newest state leader and she is already getting calls from her constituents.

"It’s around, ‘How do you continue to build trust?’, ‘How do you help to have those open and honest conversations?’," Bounkeua explained. "I think it’s not shying away from what happened but it is really the recognition that this was a very unfortunate thing and it’s still under investigation but we have to ask, ‘How do we move forward as a community to really again get to the place where we can trust state government?’"

During the pandemic, Bounkeua led the Asian Family Center and publicly addressed concerns about Asian hate crimes in New Mexico. The concerns surrounding racism and the push for representation led Bounkeua to run for the seat.

"It is time right? It’s time now all of New Mexico’s children can see themselves reflected in a governing body who’s making laws about them for them and hopefully with them," Rep. Bounkeua said. "That to me, again, was something that felt right." 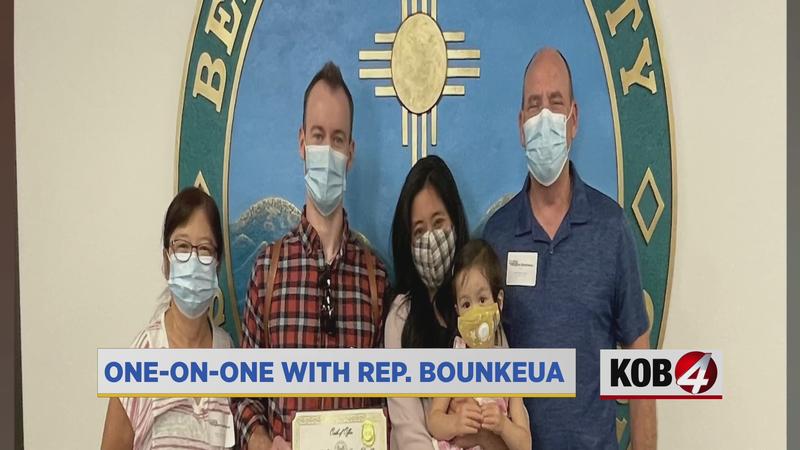 Bounkeua, whose parents were originally from Laos, was born in District 19 and is now raising a family in the district as the mother of a two-year-old.

"They went to a refugee camp in Thailand and then they came over to New Mexico," Bounkeua recalled. "Because of a mistake in the paperwork, they actually got stuck here and become undocumented in the process. So the majority of my childhood was spent in a mixed-status family household and we know some of the things that come with that, including just the inability to access different systems to be able to move freely and to just feel safe."

Growing up, Rep. Bounkeua’s parents worked multiple jobs to put food on the table and constantly worried about what was going to happen next – Bounkeua’s dad was even called to deportation court while finishing up his degree at UNM. However, Bounkeua found an appreciation for her upbringing, being surrounded by a loving family and good food and having English as her third language.

"I think a lot of that impacted me, seeing my parents go through that and the things that they were just unable to navigate and the struggles that they had but they continued to build and support the community and be advocates in their own ways for the Asian community," Rep. Bounkeua said. "I think that to me was really powerful to see that, even if you don’t have citizenship status, you do have the ability to influence change in your community which was a big thing for me growing up."