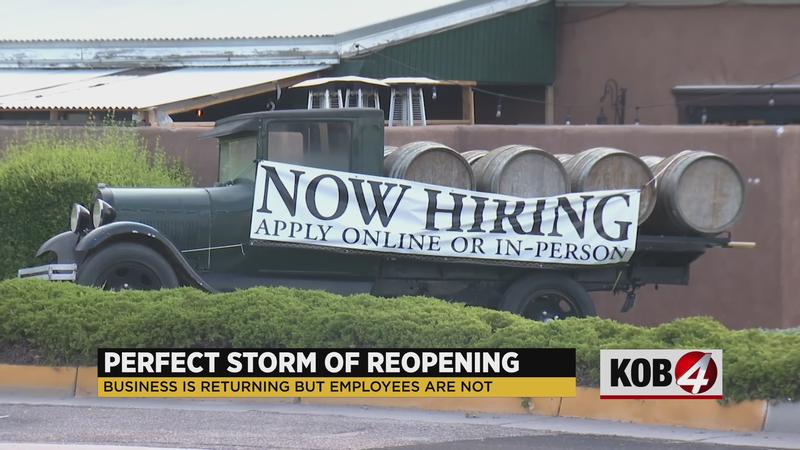 ALBUQUERQUE, N.M. – Even with the state trying to incentivize New Mexicans to get back on the job, some businesses are still struggling to hire workers.

"It makes us curtail hours of operation for our food operations, we have to curtail our banquet operations, and simple things,” Perez said. “Even the amount of rooms we can serve on a weekend because we don’t have enough housekeepers or servers to service those rooms. So it’s really impacted the business to a huge degree."

The New Mexico Business Coalition believes the extra unemployment benefits from the federal government is to blame.

"Many employees are happy to be home and happy to get paid to be there," said Carla Sonntag, president and founder of the New Mexico Business Coalition.

The state is offering a back-to-work bonus, but Perez said New Mexicans aren’t really jumping at that opportunity.

“We’ve seen people accept the job and are supposed to show up on Friday and just don’t come. They’ve learned how to manipulate the system and that’s the problem,” he said.

A spokesperson with the governor’s office said they are trying to help businesses in any way they can with vaccination efforts, grants, funding, and that back-to-work incentive.

The governor’s office said they do not believe those federal dollars are the reason people are staying home, instead they pointed to a study from the Federal Reserve that found the added funds only had a small impact:

“The state is using every available tool to assist both employers and workers, rolling out an efficient and effective vaccination effort in order to end the pandemic quickly while supporting New Mexico small businesses with grants and funding, making over $1 billion available for reopening and rehiring, in addition to providing return-to-work support payments to offset transition costs and help make it easier for New Mexicans to get back to work – and to help businesses be in a position to make decisions that make returning to work more attractive to prospective employees.”

Heritage Hotel and Resorts is offering its own signing and stay-on bonus. Perez said he expects a surge of applicants when those federal dollars do stop rolling in.

"There’s a lot to complain about, especially after coming out of this pandemic, the business levels being so good, I just keep telling myself and our teams this is going to end well," Perez said.

Those additional federal benefits will end in early September.

The New Mexico Hospitality Association has also created a job board to help connect workers to open jobs.