ALBUQUERQUE, N.M. – As New Mexico’s worker shortage continues, some business owners are adapting, including at some of the state’s vineyards.

They’ve rebounded from the drought, but as a 5th-generation farmer told KOB 4, the way some operate may have changed forever.

Noisy Water Winery is all ready for the ongoing harvest season, but they said there aren’t any workers. The winery would typically need 40 to 60 workers right now.

"And we have none of those people. There’s legitimately no people that are working in the vineyards and working agriculturally right now,” said Jasper Riddler, owner of Noisy Water Winery.

Riddle said he is frustrated.

"A decade ago, I could have reached out to people I know and said, ‘Hey, I need 45 people tomorrow to show up to help pick,’ and they’d be there, they’d be ready to roll, they’ve done it before,’” he said.

Riddle said he adapted and accepted a necessary evil: using a massive machine to harvest. He added that they bought just in time — before demand made them nearly impossible to find.

"We’re moving away from manual labor aspects of the vineyards and everything else. We’ve replaced those jobs with automation,” Riddle said.

The company also has tasting rooms across the state, including a brand-new Old Town location in Albuquerque. They’re all short-staffed, with limited hours, Riddle said.

"It’s hard enough being a farmer as it is, so if you run into those problems, it can be devastating," he said.

Riddle said if there are more service and agriculture workers available down the road, he wonders if there will be far fewer job openings because of businesses like his adapting.

Noisy Water Winery is based in Ruidoso, and their wine is in stores all over the state.

It’s made from 100% New Mexico grapes, but no longer supported by quite as many New Mexico workers. 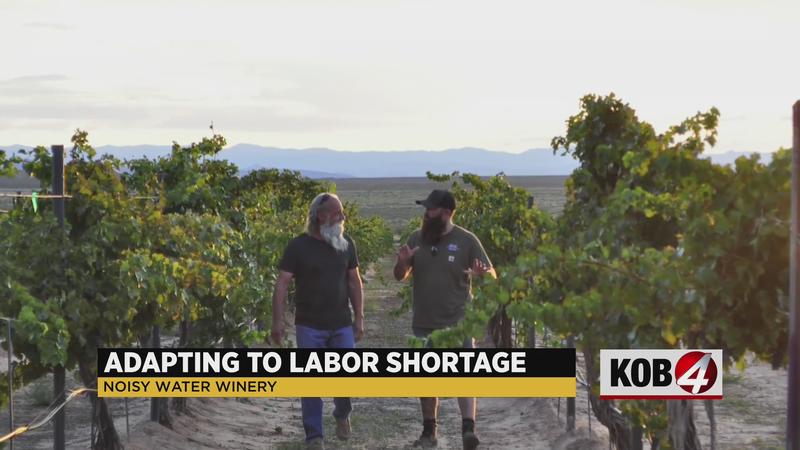