ALBUQUERQUE, N.M. — The entire Los Lunas school board has been suspended due to alleged violations of procurement and public access laws, according to a release from the New Mexico Public Education Department (NMPED).

The NMPED release states that members are not allowed to contact school staff or use school equipment or facilities during the indefinite suspension. They also cannot use the board’s attorney to represent them.

The state’s public education department warned the board about violations in November. They also provided training to the board members in January and March regarding the laws and rules.

The NMPED has credible evidence of the following violations by one or more board members: 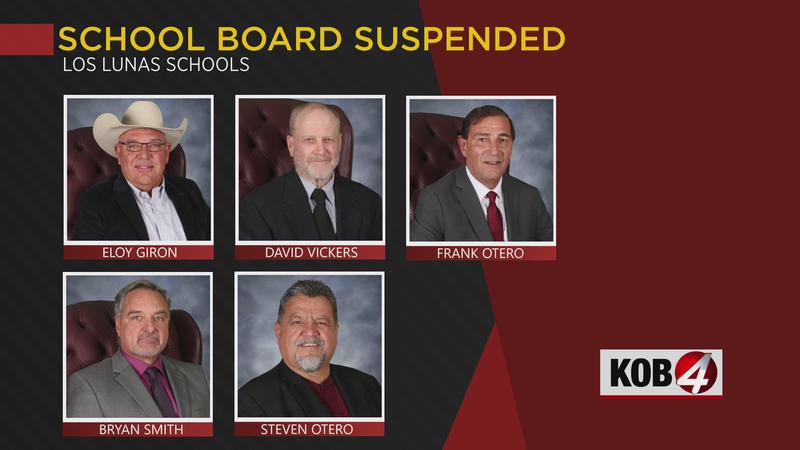 (Possible violations of board policy and/or Public School Code)

Today, the New Mexico Public Education Department suspended the five members of the Los Lunas Schools Board of Education. At this time, the district is unable to comment on any of the statements outlined by the NMPED, other than to say that the School Board is an integral part of the success of a school district and its student outcomes. It is important that everyone is held to the highest standards.

As outlined in the PED statement, Los Lunas Schools Superintendent Dr. Arsenio Romero, will work with the Secretary to ensure that Los Lunas Schools complies with all orders and actions from the NMPED. This includes my communicating with, and reporting directly to, the Secretary of Education, Dr. Ryan Stewart. The administration and staff will continue to work diligently to continue to operate the District efficiently and successfully throughout this transition.

“As Superintendent of the Los Lunas Schools, I want to assure our parents, students, and the community that every student will continue to have the best opportunity for a great learning experience,” said Dr. Romero. “We will continue to move forward with that goal. Thank you for your support during this transition.”

Los Lunas Schools anticipates that our community will have questions about today’s announcement by the NMPED. We will provide links on the LLS website with additional information as it becomes available from NMPED.