ALBUQUERQUE, N.M. — The Bernalillo County Sheriff’s Office released the names of the two victims that were killed in a suspected DWI crash involving an off-duty police officer.

BCSO said 21-year-old Diego Robles Arellano and 50-year-old Alfredo Escaname-Hernandez died when Brandon Barber crashed into them near I-25 and Tramway over the weekend. Investigators said the third victim, 21-year-old Fernando Arellano, was taken to the hospital with a brain bleed.

Barber, who is an officer with Cuba police and a member of the National Guard, appeared in court Thursday. The state asked a judge to keep him behind bars until trial, however Judge Brett Loveless denied that motion.

"So the state has failed to demonstrate by clear and convincing evidence that there are no release conditions that the court can fashion to adequately protect the community and specifically keeping him from driving,” the judge said.

Prosecutors tried to argue that Barber was too dangerous, but the defense said Barber would be staying with his parents, who are in law enforcement. 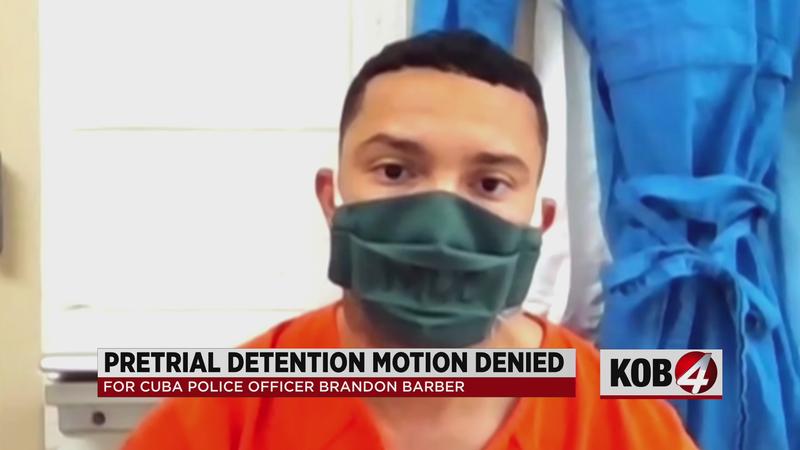 Barber will also have to follow certain rules when he’s released, specifically no driving and no drinking.

"With pretrial services supervision at level four, and Soberlink. And Soberlink will randomly require the defendant to blow into a breath machine device, and will instantaneously measure his alcohol level, which will be broadcast to pretrial services,” Judge Loveless said.

"And what we need to take away from it is how do we advocate for better DWI accountability,” Gonzales said in a previous interview.

According to investigators, Barber was driving the wrong way on the interstate when he crashed into the victims’ SUV. Officers said he smelled like alcohol, had blood-shot eyes, and was making odd statements. They also found a half empty handle of alcohol in his truck.

Barber is facing two counts of homicide by vehicle, aggravated DWI, and driving with an open container. He could be released later Thursday, or when a Soberlink device becomes available.

The DA’s Office sent the following statement after the judge decided to release him:

"We’re disappointed in the judge’s decision today to deny pretrial detention for Brandon Barber. Barber was previously convicted of driving under the influence and his latest crime demonstrates that he presents an extreme risk to public safety. Regardless of the court’s ruling, the District Attorney’s Office will continue to seek detention when repeat drunk drivers kill or injure others and do our best to try and protect this community."